Avalanche is a fast, secure, and scalable blockchain built to become a universal platform for creating, transferring, and trading digital assets.

The chain is comprised of three components:

- Platform Chain (P): coordinates validators, creates, and manages subnetworks. The P-Chain allows for individual blockchains (permissioned or permission less), that may utilize different virtual machines to launch on the Avalanche Network and cross-communicate with each other. Utilizes the Snowman consensus protocol. 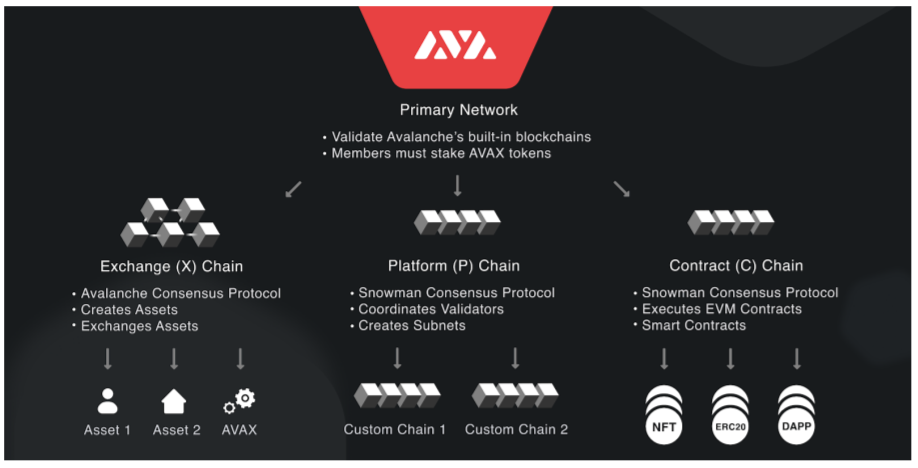 Avalanche aims to become the “blockchain of blockchains” composed of thousands of individual subnetworks that communicate and work together to construct an interoperable network. Although subnetworks are a work in progress, they would allow the creation of custom blockchain according to the builder's needs.

Avalanche features a unique consensus mechanism. The core idea of their consensus is to guide all the nodes into one common outcome via a systematic and recurring subsampled voting process. This mechanism ensures with a high probability that all nodes will fall into the same outcome after more than one round. Due to its exponentially decaying feature, the chances of it still being divided after more than one round is astronomically small; this allows for instant finality of transactions (>2 seconds). 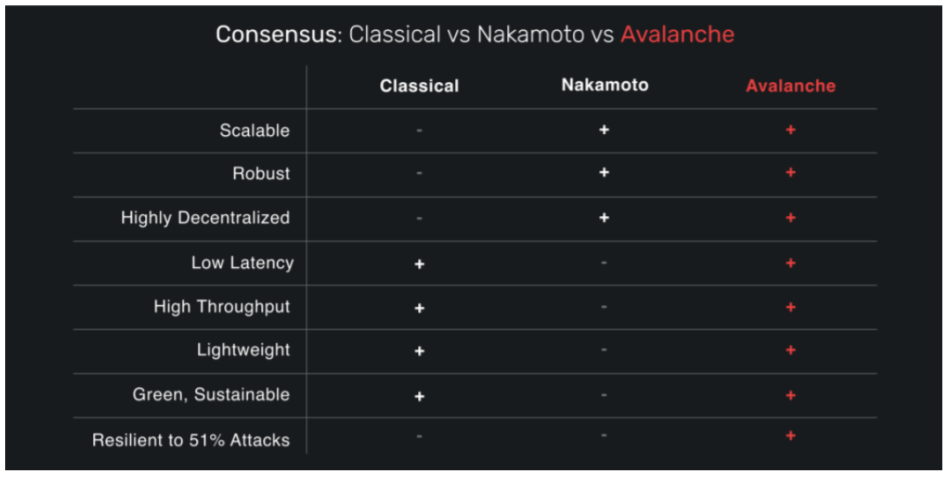 The $AVAX token is the Avalanche Network’s utility token, meaning that every transaction made on the blockchain is paid with $AVAX. Avalanche’s $AVAX token has a fixed supply cap of 720 million. Half of the total token supply (360 million AVAX) was minted at launch, with vesting periods ranging from 1 to 10 years. The other 360 million AVAX will be used as staking rewards for the coming years.

Validators also earn staking rewards to secure the network. Currently, just under 60% of the circulating supply of $AVAX (238 million tokens) are staked, and the current staking yield for AVAX is about 9.72% per year.

The $AVAX token was designed to be deflationary. It features a maximum fixed supply; $AVAX tokens are burned with each transaction, With each transaction on the Avalanche Network, the transaction fee paid in $AVAX is burned. There are different tiers of transactions that vary in their fee structure. For example, creating a subnetwork on Avalanche carries a considerable fee (roughly 1 $AVAX), while individual transactions take the lowest costs (approximately 0.001 $AVAX depending on gas prices). This mechanism was implemented to make $AVAX a deflationary asset over time, ultimately driving up the price of $AVAX.At the time of writing this, approximately 714,000 $AVAX burned, equating to roughly $46 million at current prices.

Although staking rewards are inflationary, if we assume regular S curve adoption rates for on-chain tx growth, then within four years, AVAX will turn into a deflationary asset. 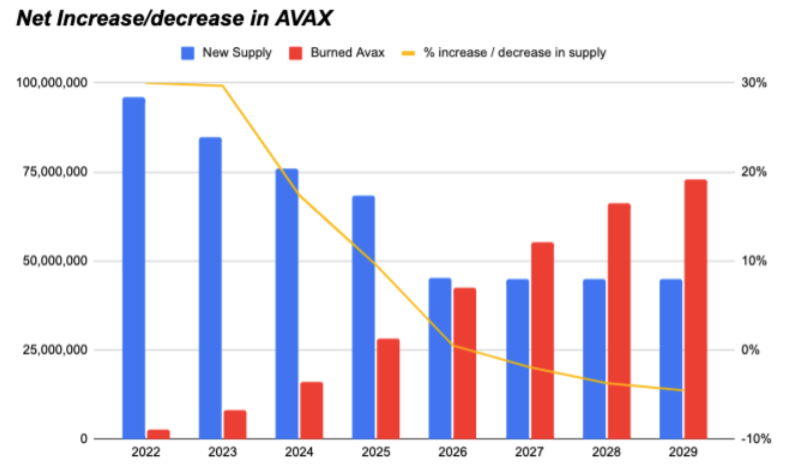 Aside from the 50% total token supply reserved for staking rewards, $AVAX features a very diversified token distribution structure. 50% of the total token supply (360 million $AVAX) was minted with vesting dates ranging from 1-10 years. 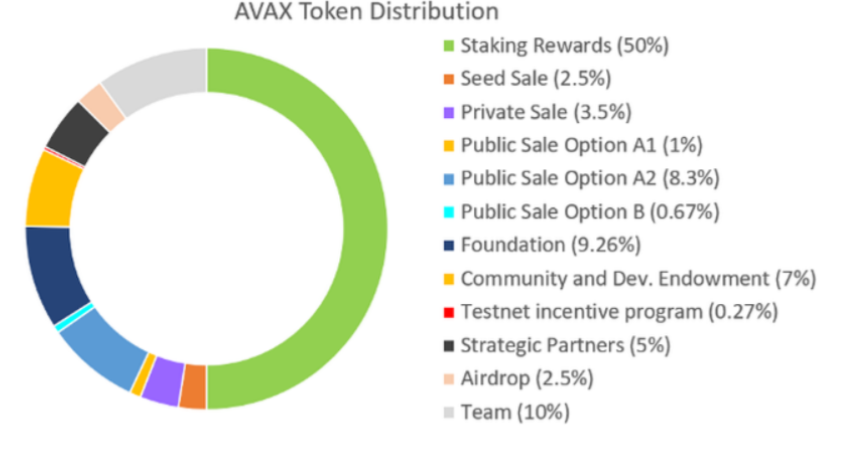 The minted token supply can be broken down into 11 sub-categories (but the largest allocations are highlighted below):

- Private Sale: 3.5% of total tokens were allocated to the private sale at a price of $0.50 per token. These tokens featured the same 1 year vesting schedule as the Seed Sale tokens.

- Public Sale Option A1: 1% of total tokens were allocated to the Public Sale A1 at a price of $0.50 per token with a maximum purchase of $25,000 USD per person. These tokens featured the same 1 year vesting schedule as the Seed Sale and Private Sale tokens.

- Public Sale Option A2: 8.3% of total tokens allocated were to the Public Sale A2 at a price of $0.50 per token with a maximum purchase of $2.5 million USD per person. These tokens have a 1.5 year vesting schedule where 10% was released on the mainnet launch (Sept. 21, 2020) and 15% of the remaining tokens would be released every 3 months for the following 18 months.

- Public Sale Option B: 0.67% of total tokens were allocated to the Public Sale B at a price of $0.85 per token with no vesting period.

- Foundation: 9.26% of tokens were allocated to the Avalanche Foundation, a Singapore based non-profit that oversees the Avalanche ecosystem. These tokens are to be used for ecosystem development initiatives such as marketing and incentive programs. These programs have a 10 year vesting period.

- Community and Developer Endowment: 7% of tokens were allocated to the Community and Developer Endowment. These tokens are awarded to individuals or groups that are marketing the blockchain, fostering community development, or developing key infrastructure tooling. These tokens are awarded in the form of grants and have a 1 year vesting period from the date they were awarded.

- Airdrop: 2.5% of tokens allocated were airdropped to certain communities of users with the purpose of fostering community development and onboarding new users to Avalanche. These tokens have a 4 year vesting period.

- Team: 10% of tokens allocated were designated for the Ava Labs team. These tokens have a 4 year vesting period, but many team members have opted to extend their vesting period for an additional 4 years.

Avalanche was founded by Cornell computer scientist and co-director of IC3 Emin Gün Sirer. He has been a professor at Cornell University for almost 21 years. He is also one of the co-founders of bloXroute Labs, a blockchain scalability solution that allows cryptocurrencies and blockchains to scale on-chain without fundamental protocol changes. He is well known for his work in computer networking, distributed systems, and operating systems. Sirer is well-known for his 2003 research paper “Karma,” where he was one of the first people to introduce the concept of a Proof-of-Work minting mechanism for a cryptocurrency.

The President of Ava Labs is John Wu. He has a rich background in traditional finance. He is the former CEO of SharesPost Digital Asset Group; the founder of Sureview Capital, a global hedge fund backed by The Blackstone Group; former portfolio manager at Kingdom Capital; and analyst at Tiger Management. He holds an MBA from Harvard University and a BS in Applied Economics and Business Management from Cornell University.

The Avalanche ecosystem has experienced exponential growth over 16 months since its mainnet launch on September 21, 2020. It currently features over 400 projects ranging from DeFi to NFTs and Gaming. Ava Labs has made it apparent that they are highly devoted to ecosystem growth by launching multiple incentive programs to attract projects and developers to the Avalanche ecosystem. 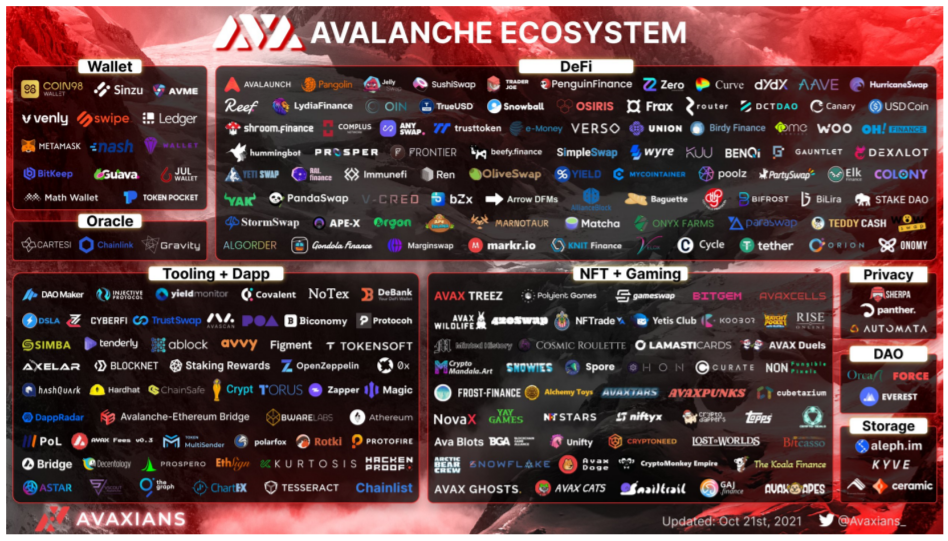 Avalanche Rush is a liquidity mining program where the Avalanche Foundation raised $180 million to incentivize DeFi protocols such as Aave and Curve to launch on the Avalanche blockchain. This incentive program seeks to expand Avalanche’s DeFi ecosystem to create a more accessible, decentralized, and cost-effective DeFi landscape. The Avalanche Foundation has set aside a portion of the rewards for current and future native Avalanche dApps, but plan to continue integrating imported DeFi applications to the growing ecosystem.

Going forward for DeFi, the focus of the Avalanche ecosystem in 2022 will be on DeFi 2.0 applications and layer 3 of DeFi stacks. These applications consist of structured products, derivatives market, and asset management related protocol. 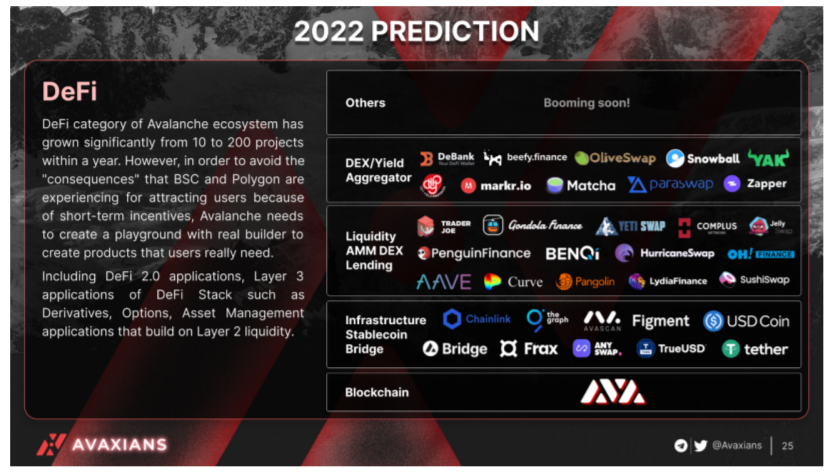 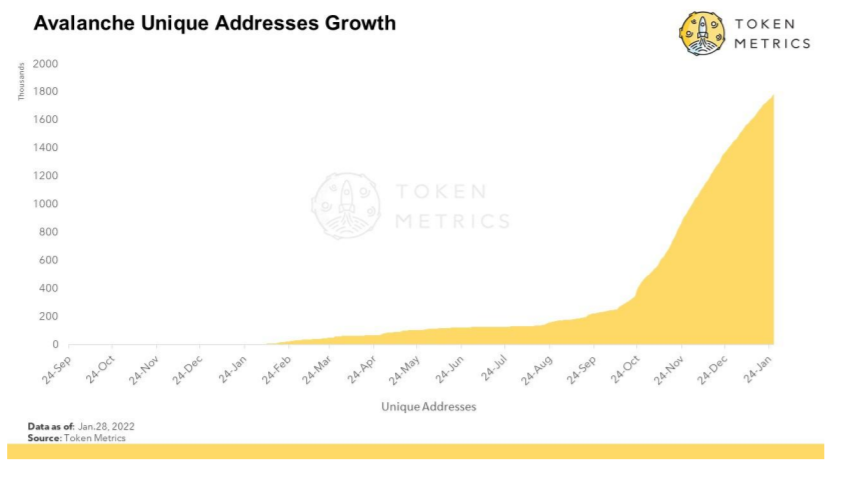 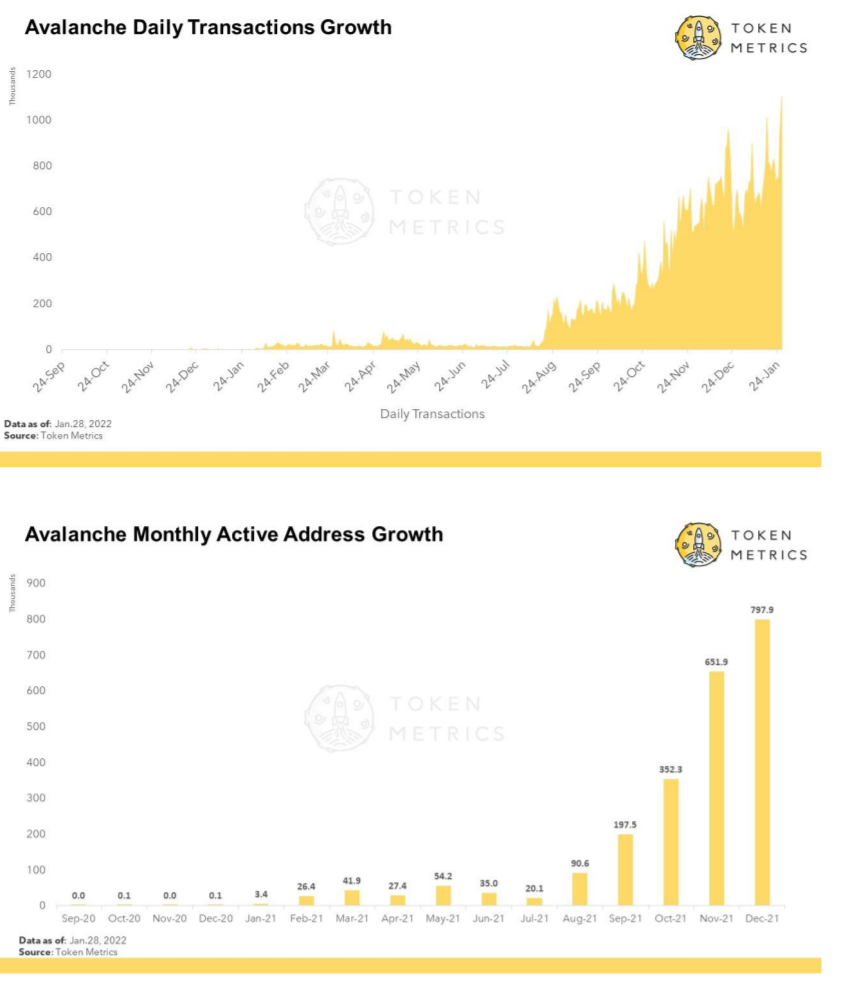 As highlighted above, network usage soared over the final four months of 2021. This can be primarily attributed to the growth of familiar DeFi services on the network (decentralized trading via Pangolin and Trader Joe, borrowing and lending via Benqi) along with the expansion of leading Ethereum protocols (Aave and Curve) into the Avalanche ecosystem. Although the AVAX market cap growth rate slowed during Q4 relative to its TVL (exploded 714%). While correlation doesn’t imply causation, it appears that users wanted exposure to the Avalanche Rush incentive program that was boosted by the arrival of Aave and Curve in October. 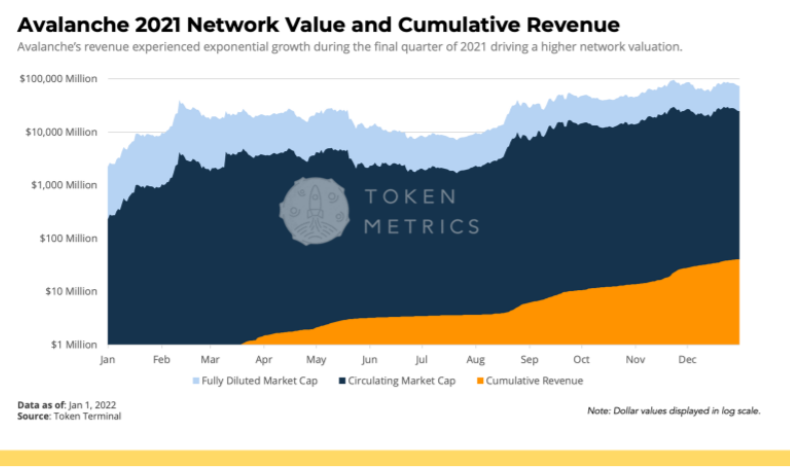 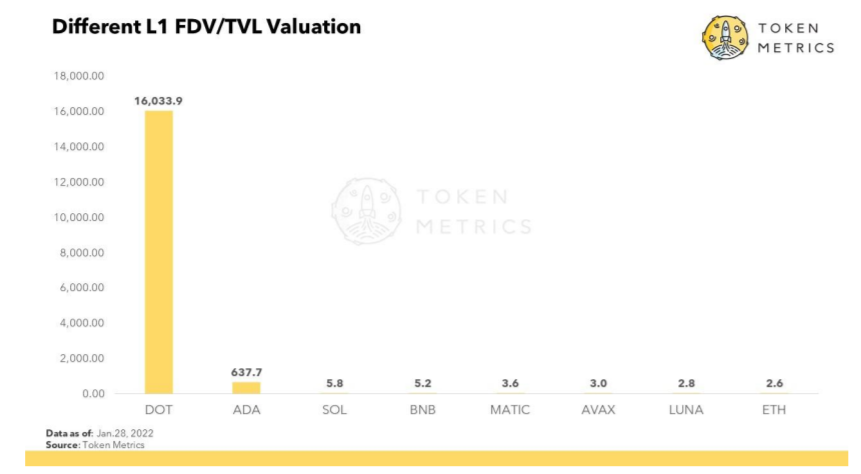 Another way to value AVAX would be to look at FDV/TVL ratio. This ratio tells us the multiplier of its TVL the network is trading at. Lower FDV/TVL implies cheaper the protocol and consequently more upside. AVAX appears to be on the cheaper side. Only LUNA and ETH are trading cheaper, but it can be argued that ETH especially has lower growth prospects relative to AVAX on a forward-looking basis. 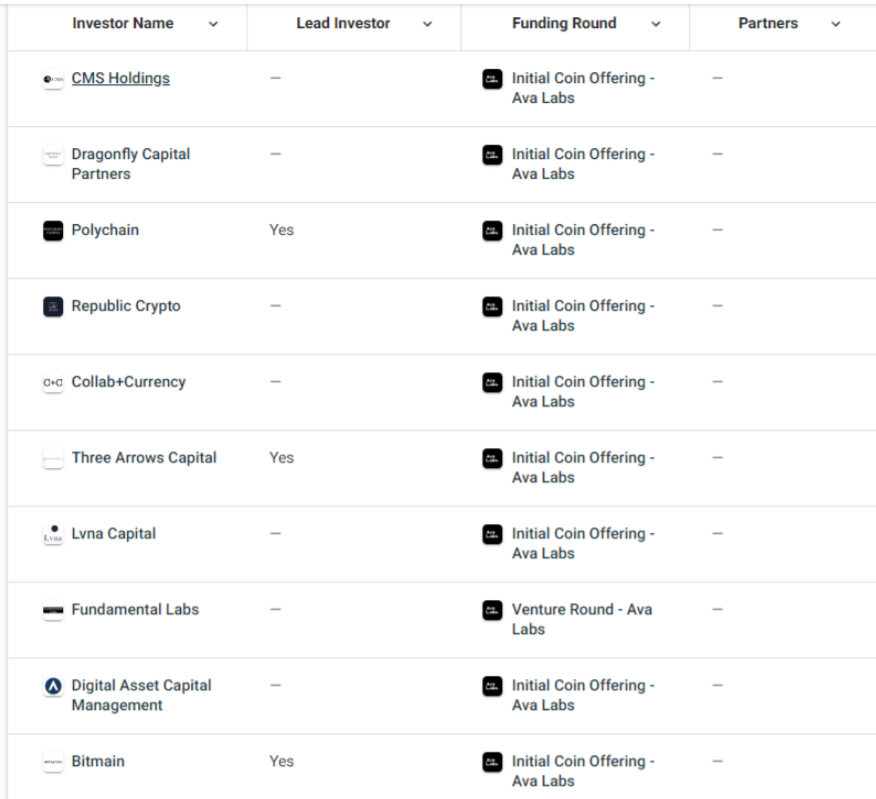 Notable Partnerships and Development Ahead

In November 2021, Deloitte (a multinational financial services firm) announced that they would be partnering with Ava Labs. Deloitte’s goal is to leverage Avalanche’s blockchain technology to support its work with the U.S. Federal Emergency Management Agency (FEMA).

In December 2021, Mastercard announced that they had selected Ava Labs to join the Mastercard Crypto Startup Path, a program aimed at solving how blockchain technology can help democratize payment systems for people and businesses around the world.

Recently, Avalanche has also supported new financial primitives like Initial Litigation Offering (ILO). Apothio ILO was the first tokenized litigation funding for one of the largest US crop destructions. ILOs tokenize the funding required to pursue litigation in civil cases where the party initiating the lawsuit wishes to raise capital to ease the financial burdens of litigation.

Another area of focus is expected to be the development of subnets. Avalanche will continue to pursue developing flexible and customizable subnets to enable individuals and institutions to create custom blockchains tailored to their needs and go to market more efficiently. If successful could serve as another catalyst for further ecosystem growth.

Avalanche on-chain governance is also still in development. AVAX will at some point be used to provide on-chain governance for critical network parameters where participants can vote on changes to the network and settle network upgrade decisions democratically. Parameters will include the minimum staking amount, minting rate, and transaction fees.

The core platform upgrades will continue. Significant upgrades, known as Apricot, are being implemented in phases, in which phase five of six was implemented successfully during Q4. Several patches were implemented in phase five aimed at P to C chain atomic transfers and C-chain fee algorithm optimizations. These optimizations would help the network scale further and set a strong foundation for interoperability in the future.

A significant concern for AVAX stems from the competition front. There is intense competition within Layer-1 blockchains. Many solid projects compete for the same piece of market share - the list is long and contains names such as Solana, Binance, Terra, Near Protocol, Fantom, Cardano, and Crypto.com. 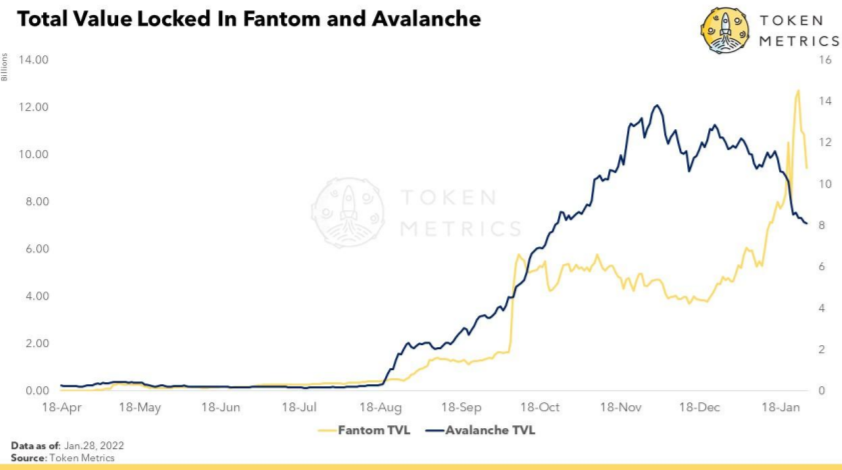 The growth rate of development activity declined slightly throughout 2021. While the rate dropped, the number still indicates a consistent buildout of the network’s infrastructure from its core team. That said, as competition from other chains rises, and the industry still has dev shortages - this will be an essential metric to watch out for in 2022. 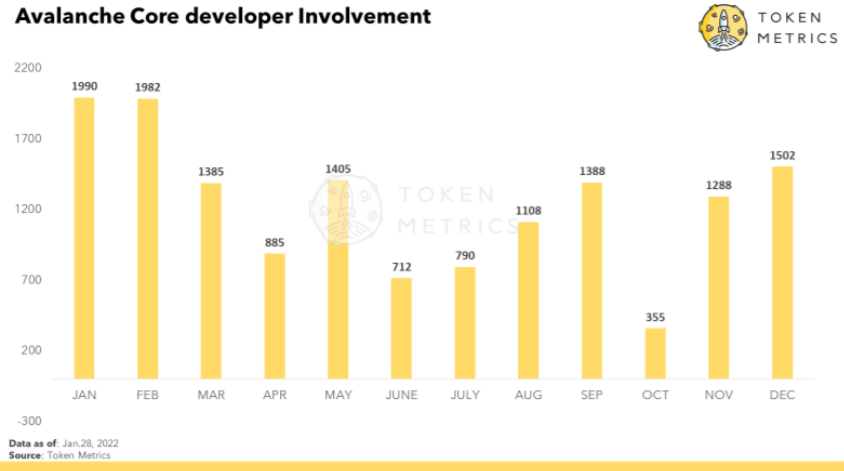 In a nutshell, there are multiple reasons why we like AVAX. The token has a burn mechanism that will make it deflationary in the long run. The developer community is strong. Its C-chain is 100% EVM compatible, which means any dApp built with Solidity for Ethereum or any app running on Ethereum can run on the Avalanche C-Chain too. It has interoperability capacity with its subnets, similar to Polkadot and Cosmos. It has instant finality (it's quick) and low transaction fees. Most importantly, the valuation metrics are on the cheaper side. Accumulating AVAX at the trendline around the price range of $35-51 could be a lucrative entry point from a risk-reward perspective. Not financial advice!