There’s more to NFTs than simply notoriously expensive monkey cartoons. Potential future NFT applications include a number of applications in gaming, real estate, creative property rights, club memberships, and more. The fact that there is a rampant hype culture next to it for the right to assert you own the full rights to a digital image doesn’t particularly matter.

Right now we are bullish on the NFT gaming sector in particular. It makes a really interesting arena for onboarding into NFT-based themes of ownership of digital assets within a game. Just ask Ethereum creator Vitalik Buterin about what happened when World of Warcraft updated in such a way that one of his character’s in-game abilities was permanently changed. NFT-based games let players preserve and transparently own certain aspects of their play experience, and this builds a great conversational bridge to the broader topic of non-fungible tokens.

Monetization in this sector has been organic, as players do not want to let their hard in-game work go to waste, giving them a viable option to sell achievements or in-game items to other players, or even across different games. This is the center of the conversation on how NFTs can and will transform the gaming industry.

The easiest way to express this kind of bullishness is by owning NFTs. For example, you might buy in-game items like the Inferno Sword from the game Lost Relics. At the same time, it’s quite early to make concentrated bets on single NFTs. There are hundreds of gaming items and multiple games released daily. We don't know which game or gaming item would hold value over time. But we definitely do know that the gaming space (especially in light of all the metaverse chatter lately) will provide incredible opportunities for NFT investing. 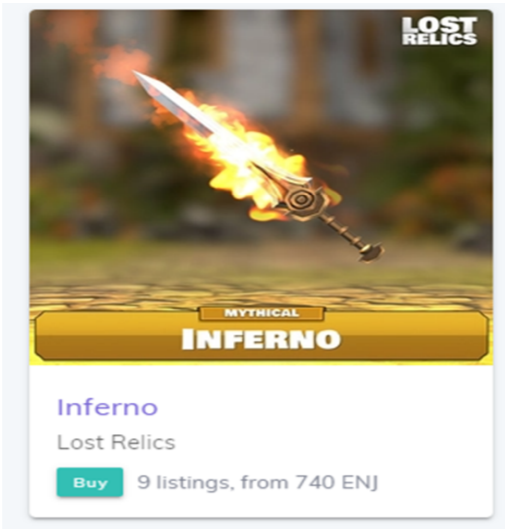 A straightforward way to get exposure to NFTs is by shopping relevant marketplaces like OpenSea and Solart, but it is clear that these NFT marketplaces will need to implement certain features for the sake of future-proofing themselves. Those features might include:

● A marketplace that doesn't require the user to have blockchain knowledge in order to purchase NFTS — who can effectively forgo a crypto wallet or interacting with an exchange to execute an NFT sale?

● Zero fees (or close to it) for minting NFTs, with an added option for the developer to subsidize those minting costs.

● Provide NFTs that evolve based on actual events and somehow unlock access or benefits in the real world. For example, you ask Alexa to give your child an NFT that opens two hours of gaming when they finish homework.

Two projects that scored high on fundamentals and captured the themes we discussed above are Efinity and Unique Network. Both projects are next-generation NFT blockchain built on Polkadot. These two projects are creating a marketplace which will be able to communicate with other blockchains, both inside and outside of Polkadot. They aim to solve issues pertaining to generally high fees, slow networks, and inflexible smart contracts that are currently present on Ethereum. In this report, we will be focusing on Efinity Network, as it is part of the first auction on Polkadot.

● Scored 88 on our Fundamental Scorecard and 86 on our Technology Scorecard.

● Efinity is developed by Enjin, an NFT marketplace and development platform that lets people create NFTs on Ethereum. Enjin was founded in 2009 and it currently has a network of over 20 million users globally.

● Efinity are veteran developers on Ethereum who now want to create a new marketplace and development platform for NFTs on Polkadot. This lets them create an NFT highway for the entire crypto space.

● Efinity can process up to 1,000 transactions per second, with transactions confirmed in less than six seconds.

● Efinity network will have an NFT marketplace, and is also building a token standard called Paratokens for Polkadot. This standard will be compatible with parachains, parathreads, and smart contracts, so their marketplace would be interoperable with the entire Polkadot and Kusama ecosystems. 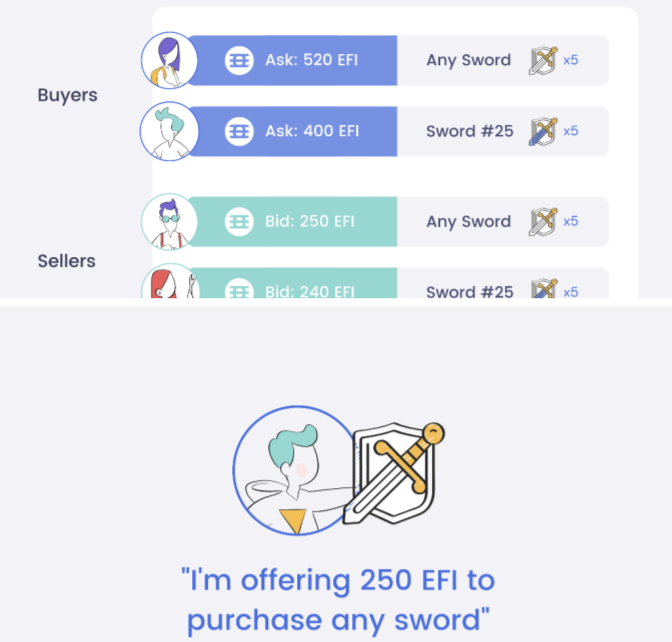 ● Creating a price discovery mechanism. Suppose you search for a gaming item and find that the NFT belongs to one of the players in some other chain, and that player isn't actively selling. Nevertheless, you can place a bid on this NFT and see if the owner of that NFT bites. If he/she doesn't go for it, you'll still get rewarded in Efinity tokens for being the highest offer. This whole process is set to improve the liquidity of NFTs across chains to make Efinity the highway of NFTs.

● Feeless NFTs. Developers can choose to subsidize costs for their customers by depositing EFI tokens to a Fuel Tank they control.

● Crafting allows existing tokens to be modified or creates new tokens by following a “recipe.” This system is useful for gamifying collectibles with minimal effort. Anyone who has a copy of the recipe can execute it on Efinity without any coding experience. 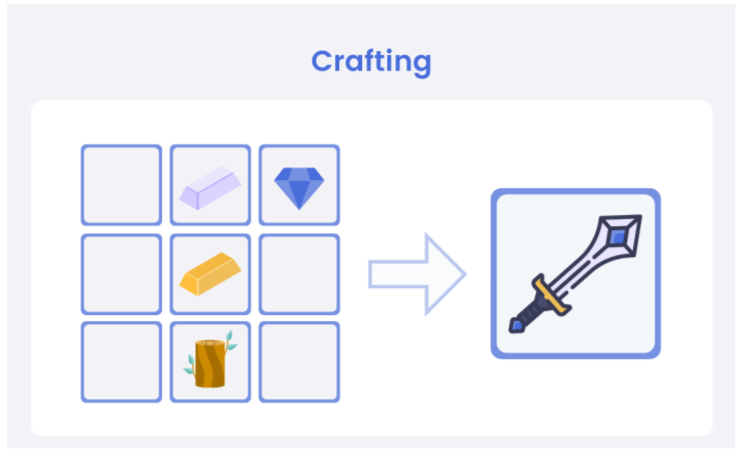 In the private sale round, Efinity raised a total value of $18.9 million and garnered the interest of high-quality backers like those pictured below: 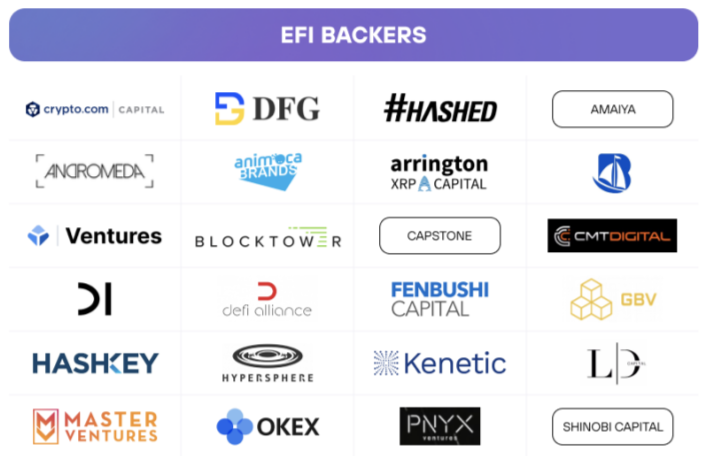 Efinity is built and developed by the Enjin team, which makes them quite technically strong. They created the ERC-1155 token standard, which is now the go-to standard for the game-based NFTs. The team also has experience in the gaming sector.

Maxim Blagov, CEO and co-founder: Until now, he has spent nearly 14 years devoted to the Enjin ecosystem. He graduated with a degree in computer science from the University of Technology Sydney. Witek Radomski, CTO: Also an early contributor to Enjin, he has 13 years of working experience and pioneered the ERC-1155 token standard. Caleb Applegate, COO: In the past, he was an advisor, film producer, and former COO of Mineplex, one of the world's largest Minecraft gaming servers.

The native token, EFI, has multiple use cases and incentivizes network effects. Some of this utility includes:

● Rewards for Collator Nodes who run the network.

● Rewards for buyers and sellers who facilitate price discovery.

● Developers who propose projects built on Efinity are eligible for grants from the community pool.

There is a total supply of 2,000,000,000 EFI tokens, and that number will be capped (no inflation) and allocated as follows:

● Public Sale: %% Token supply is fairly distributed here, and the 35% distribution to the ecosystem is already in place. On November, 4th 2021, the team announced they had formed a $100 million dollar Efinity Metaverse Fund to formalize support for ecosystem partners and help various metaverse, gaming, and dApp projects build on Efinity. 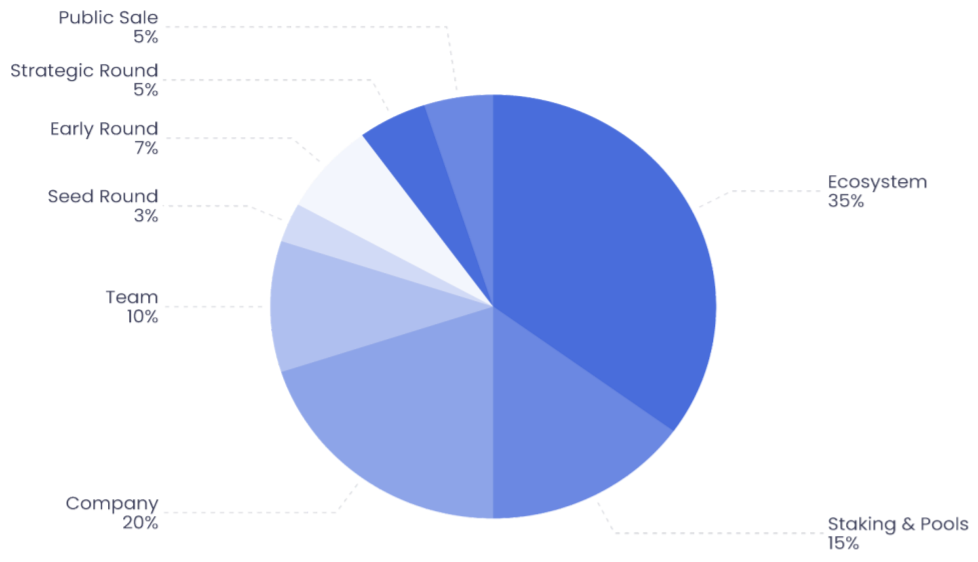 In 2022, there will be aggressive unlocks that could put pressure on EFI prices. Those token metrics are as follows:

● Ecosystem: 3% to the decentralized Treasury Pool on genesis. The remainder is unlocked monthly to the Ecosystem fund over 3 years.

● Staking Pool: 15% of EFI supply to distribute to EFI pool as a Block Reward. The supply will be fully distributed after 8-10 years. 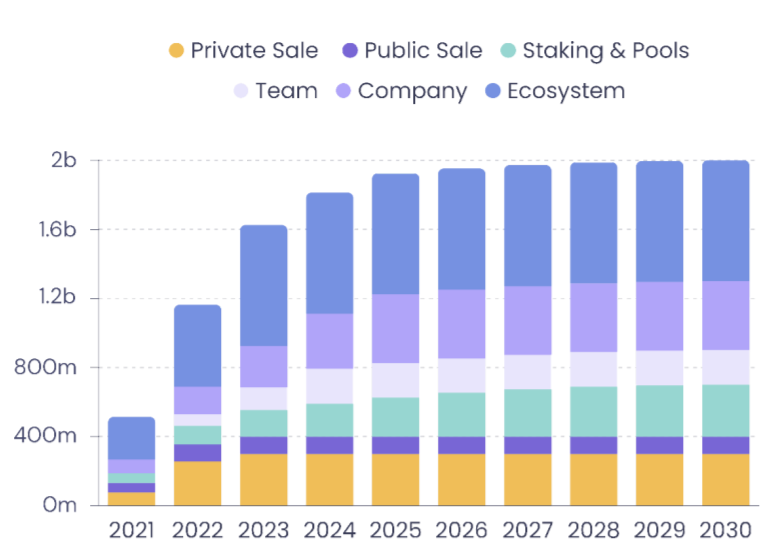 Relative to its peer group and the average valuation projects in the NFT and gaming sectors, Efinity is more expensive. This limits ROI potential — the value investor play here would be to build a position at lower price point. 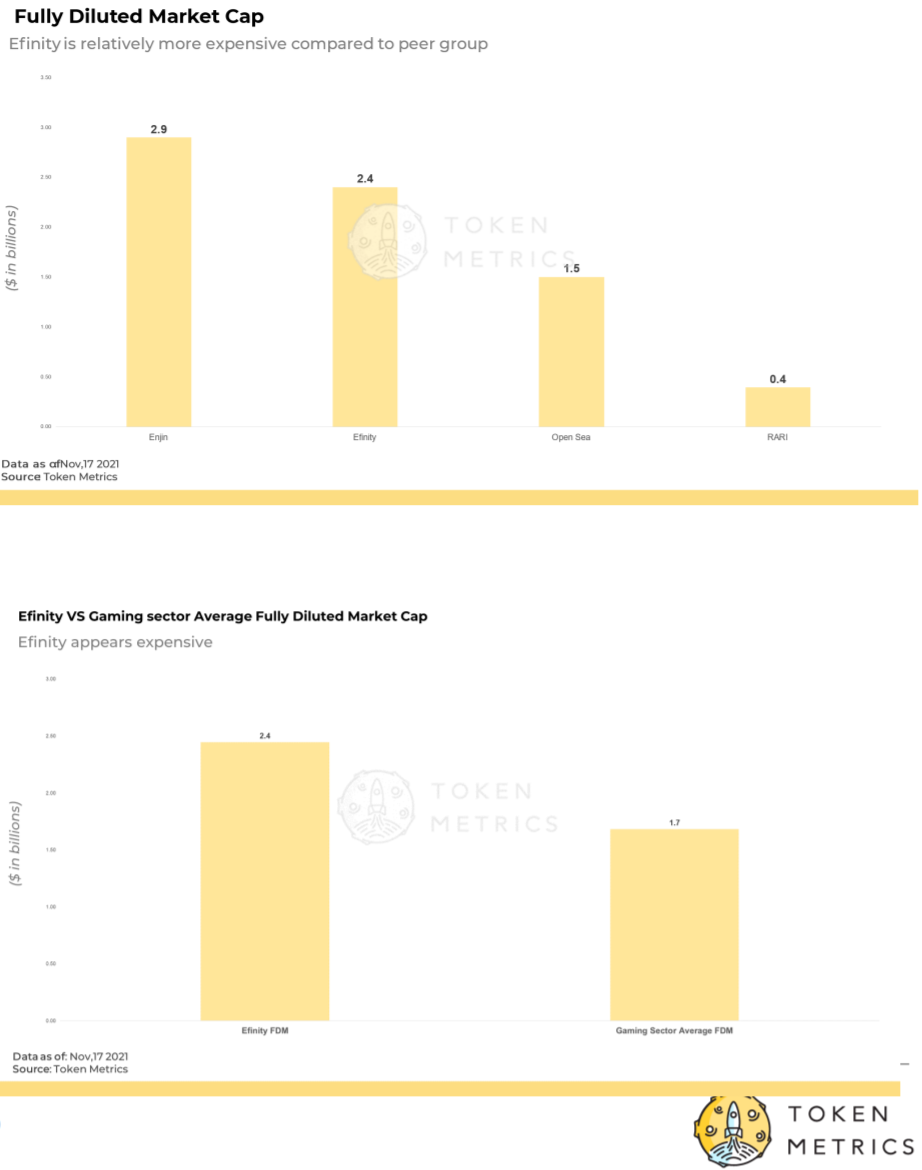 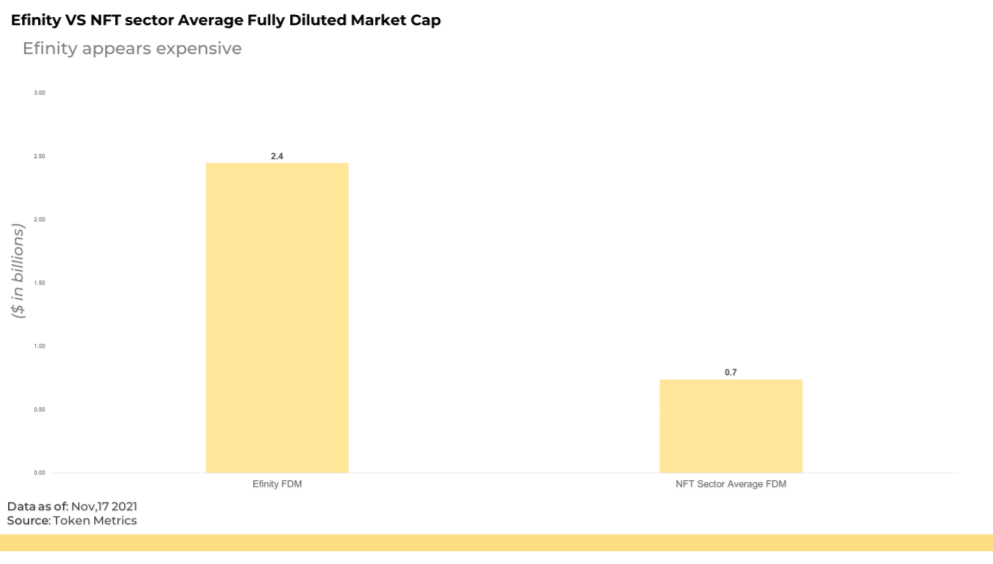 Compared to the average valuation of the rest of the metaverse sector, Efinity is slightly cheaper. If we assume Efinity can capture 0.5% of the total crypto market size due to its network effect, it may give investors 7x ROI, even from current prices. 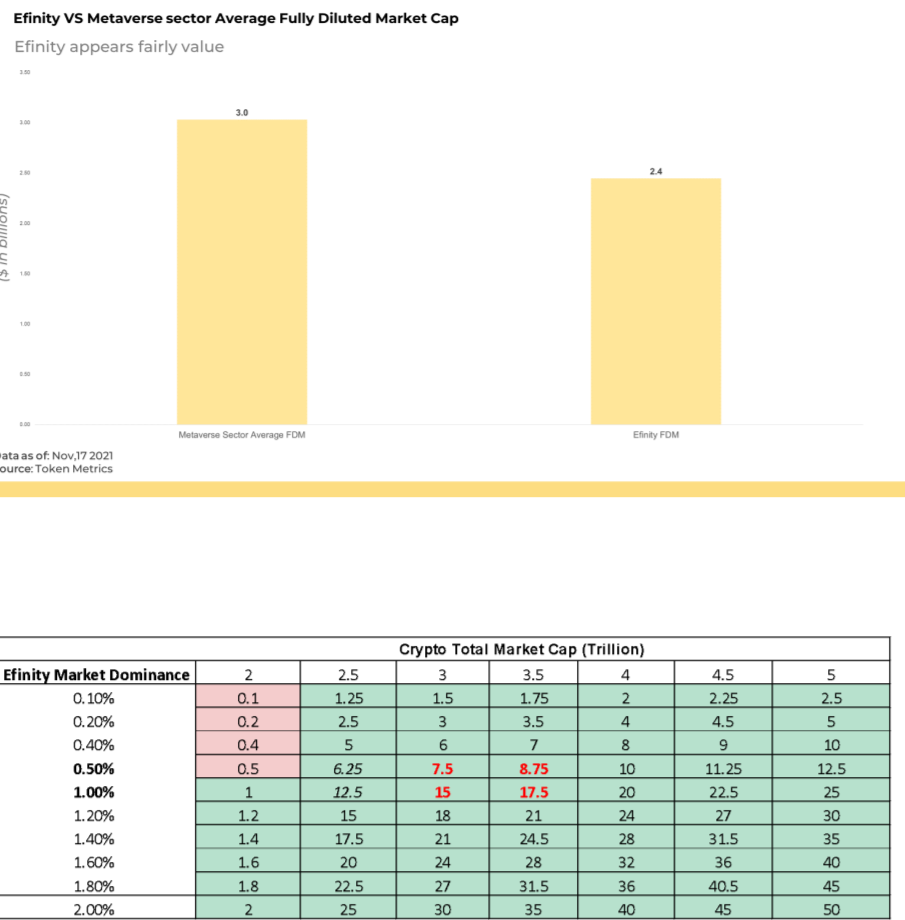 ● Crypto competitors in the Polkadot ecosystem like Unique Network.

● Polkadot is untested – at current prices, investors are paying for perfect execution that might not happen.

● Big gaming companies might start up their own NFT marketplaces, reducing the total available market for Efinity

How to buy an EFI token

• If you are a DOT holder, you can join their crowdloan. The rewards are approximately 7.5 - 9.75 EFI per DOT contributed per year. • DEXes - Uniswap, Sushiswap