Aurora is a platform that lets Ethereum Virtual Machine (EVM) contracts run on the Near blockchain.

- the Aurora Bridge, enabling transfers of ERC-20 and other EVM compatible tokens

- AuroraDAO, the autonomous governance of the Aurora protocol.

EVM compatibility is noteworthy for Near. As it will easily let projects already built on Ethereum move to, expand to, or transition to the Near blockchain. For reference, Ethereum has around 2,900 dApps at the time of writing, representing nearly 80% of all the dApps developed in the crypto industry.

Developers can deploy their existing codebase that they had on Ethereum without re-engineering it for Near. Ease of transition for developers also means that Aurora will have broad, built-in network effects from the very beginning, and can grow in tandem with both the Ethereum and Near ecosystems. This implies that when Aurora tokens are listed in the market, they will do quite well. We are already seeing some signs of interest from different projects.

Since Aurora is EVM-compatible, projects from Binance and Polygon can theoretically also migrate to Near. Even if these projects don't migrate, these chains were developed with EVM compatibility in mind. Because of this, their ecosystem flourished, and these chains performed well — we expect the same for Near Ecosystem with many projects. Aurora is due to transition to Near in the coming weeks, for example. This could mean not only that the Aurora token will do well, but that Near token could be a complementary way of playing Aurora's success. That said, you could start seeing a flywheel effect building up, where Aurora's success will lead to Near's success, and this will create a positive feedback loop towards Aurora's success. All in all, it’s a win-win for both the tokens.

The first example of this positive flywheel effect to be seen in the near future could be an $800 million grant for projects focused on Near-based DeFi, NFTs, DAOs, and gaming. This could act as a catalyst for Near growth and also facilitate growth with the deployment of Ethereum-based projects on Aurora. Second, regardless of the grants on offer, the Near ecosystem is accelerating with new partnerships and projects being built.

This has also led to an exponential rise in the total value locked on the Near protocol, almost 15% growth per week recently. 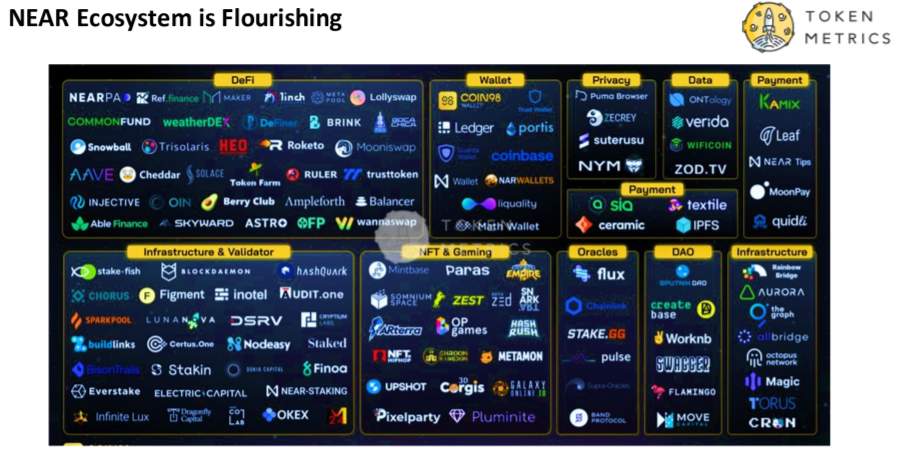 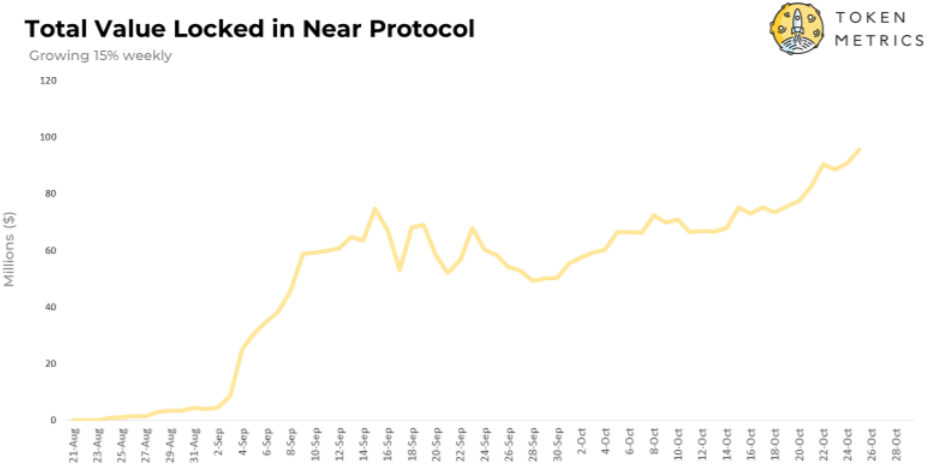 Aurora provides a number of enhancements for developers and users:

● Aurora fees are up to 1,000x lower than Ethereum's gas fees. For instance, the cost of transferring an ERC-20 token is below $0.01, while for Ethereum with the extremely conservative assumption (at 50 Gwei and an ETH price of $3,000), it's around $5.40. ● Aurora is able to host thousands of transactions per second, representing an increase of 50x compared to Ethereum 1.0.

● Aurora transaction finality inherits from the underlying NEAR Protocol. In other words, it takes two NEAR blocks, or approximately two seconds, which is substantially lower even than a single block confirmation time of 13 seconds in Ethereum. Also, the fast finality of NEAR blockchain significantly reduces the risk of front-running attacks (MEV).

● The sharding approach of the underlying NEAR Protocol (which provides for horizontal EVM scaling) is not a work in progress (unlike Ethereum’s) but is actually a reality. This could act as a hedge for developers if sharding on ETH 2.0 doesn't work out as planned.

● Aurora aims for full compatibility with Ethereum development tools, such as Truffle and Hardhat. Users can use existing Ethereum compatible tools like Metamask. 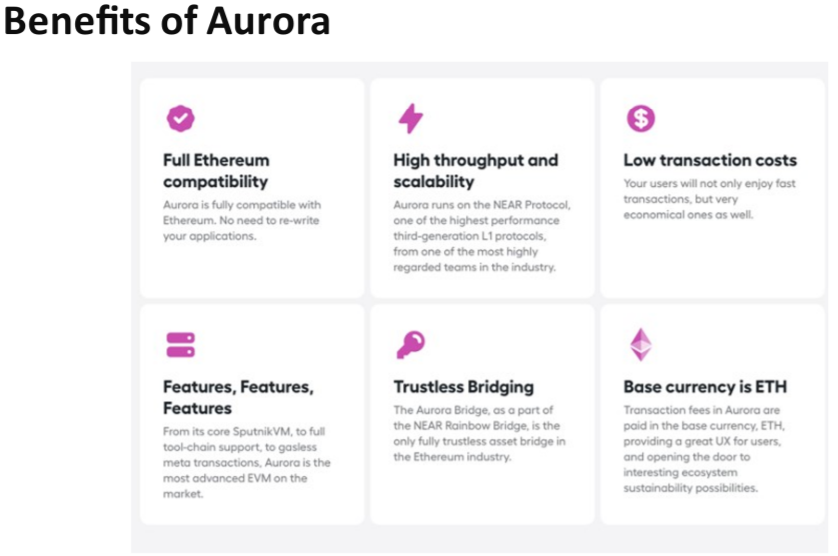 One of the unique differentiators for Aurora is the use of ETH as the base currency for the payment of transaction fees. Typical layer 2s require users and developers to acquire the L2's native tokens, like MATIC. But Aurora doesn't. Aurora wants to keep it seamless and simple for users and developers alike. This could mean a strong network effect as developers can copy and paste their Ethereum code without any changes. On the user, the side will be just like paying ETH to the protocol, while in fact, it is the NEAR token that is used for the fees. This will allow great UX for users and an easier transition towards Aurora.

The second unique differentiator is the AuroraDAO. This will consist of a "council" of seats. The holders will vote on high-level decisions and will direct subordinate organizations to implement those decisions. The list of council members is high-quality crypto protocols and VCs like Pantera. Additionally, when developers deploy their apps on Aurora, they will also be partnered with these organizations to help them scale and meet future needs. This could help with the deployment of more dApps and network effects. What's particularly interesting is that the underlying fee model of NEAR also opens the door to innovative possibilities, such as AuroraDAO channeling a portion of collected fees back to the projects running on Aurora, which could also create more network effects and stronger flywheel effects. 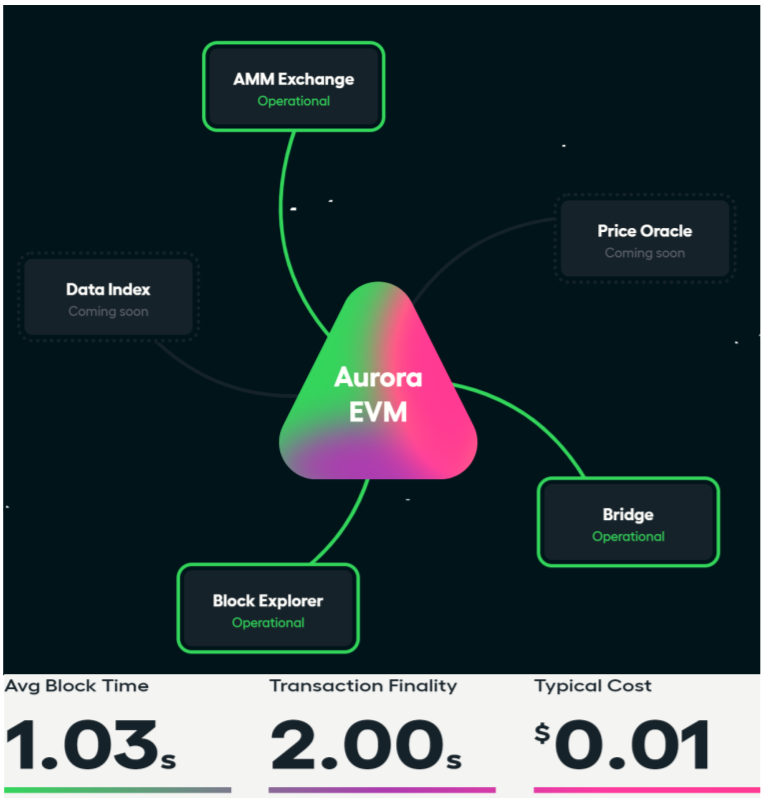 Conversely, one could also argue that the governance of AURORA is more centralized, as these council members have their own agenda to fulfill, which could hamper mass adoption. This centralization of governance is already evident in the voting, where few voters determine the outcome of the protocol.

The punchline is that allocation is centralized. In our opinion, more should have been allocated to the community and users for optimal distribution, as centralized projects do not achieve a similar level of mass adoption as decentralized projects. However, the approach the Aurora team is taking is to build the treasury and then allocate funds to new and existing projects. This could also work to generate network effects, as developers have incentives to join the ecosystem. The more dApps that are created, the more tokens will be locked on Aurora, which could create a positive feedback loop on the price of Aurora.

The total supply of Aurora tokens would be one billion. There is no information at the moment whether this would be the maximum supply. At any rate, we expect this to be the capped maximum supply since it's a governance token. The token allocation is distributed as follows: 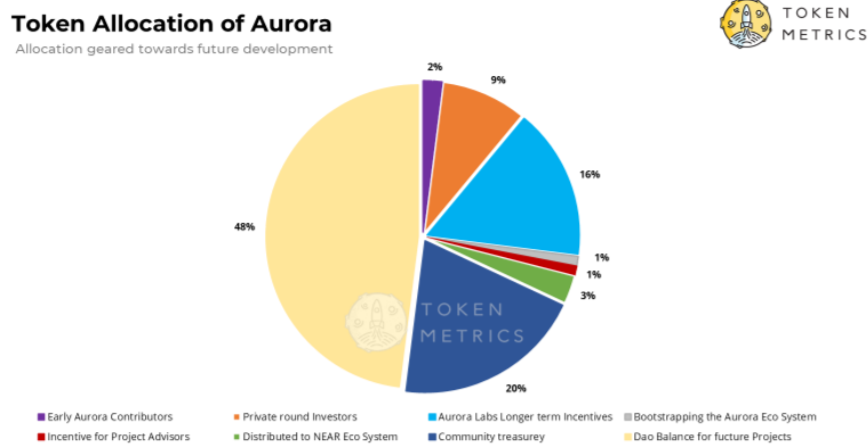 ● 9% (90 million), locked, transferred — Aurora Labs private round investors. These tokens should be subjected to the unlocking scheme.

● 3% (30 million), unlocked, transferred — allocated to Aurora Labs to be distributed to NEAR ecosystem over the next three years. These tokens should be distributed linearly evenly to the delegators of Aurora validator. Aurora validator should switch to the following scheme of operations: fees should be equal to 30%, with 10% burned, and 20% used to fund the Rainbow Bridge operations and Aurora RPC.

● 1% (10 million), unlocked, transferred — allocated to Aurora Labs to be used as incentives for project advisors

● 1% (10 million), unlocked, transferred — allocated to Aurora Labs to be used for bootstrapping the Aurora ecosystem. These tokens should be used for IDO (public sale through one or multiple DEXes), deployment of pools on AMMs (to be matched by Aurora Labs own funds in stable coins or NEAR token), market making, early partnerships, and other activities determined by Aurora Labs. IDO parameters should be approved by the DAO.

AURORA is currently a governance token. Additionally, the use of ETH as the base currency within Aurora for the payment of transaction fees could imply that the velocity of the AURORA token would be high. This means stakeholders do not have enough incentive to hold the Aurora token; hence there might not be enough support for long-term price appreciation.

That said, there might be a possibility that AuroraDAO might change AURORA token utility as some of the board members are VCs, and their incentives are aligned to improve tokenomics for capital appreciation.

The following may or may not be implemented in the future:

● Farming of locked funds in the Rainbow Bridge connectors

Aurora was built by the same team that created the Near protocol. Near team is considered to be highly regarded in the blockchain space.

Aurora Lab CEO Alex Shevchenko was product manager of Near Protocol and has a Ph.D. in Applied Physics and Mathematics. He previously worked as a CTO at SonoCoin. His strong technical background gives us confidence that he will be able to execute on the roadmap and also navigate technical issues posed to Aurora in the future.

Aurora CTO Arto Bendiken has 20+ years of professional software engineering experience. He worked as a technical lead previously at NEAR. A quick glance at his Github repositories also shows his impressive technical abilities, where he has contributed to 17 projects.

All in all, the team seems technically well versed. But when it comes to marketing and community building, in our opinion, it leaves more to be desired. 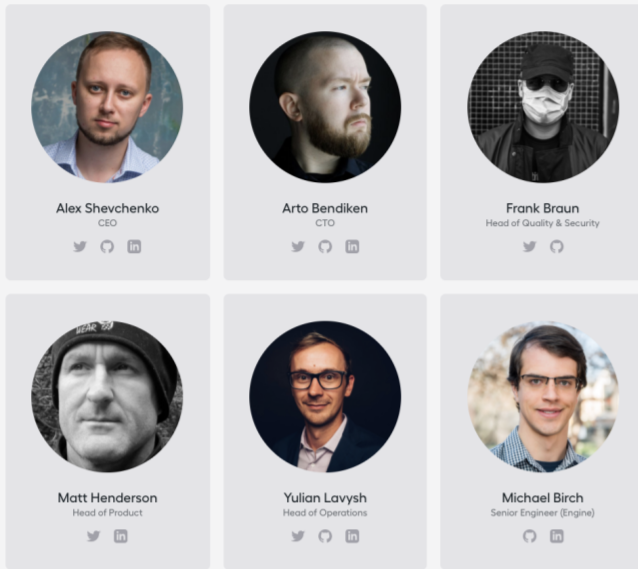 NEAR recently closed its first private round of funding by raising a total of $12 million. Pantera Capital, Electric Capital, and Dragonfly Capital led the round.

The funds will primarily be used to expand the team to hire more blockchain engineers to speed up product development and improvement.

● May 2021 — Transfer the NEAR token between Ethereum and NEAR

AURORA appears to be in the middle of the range when it comes to the valuation relative to its peer group. If we assume that it would have valuation catch up with a similar market capitalization as MATIC or MOVR, ROI potential is 20x and 4x, respectively. 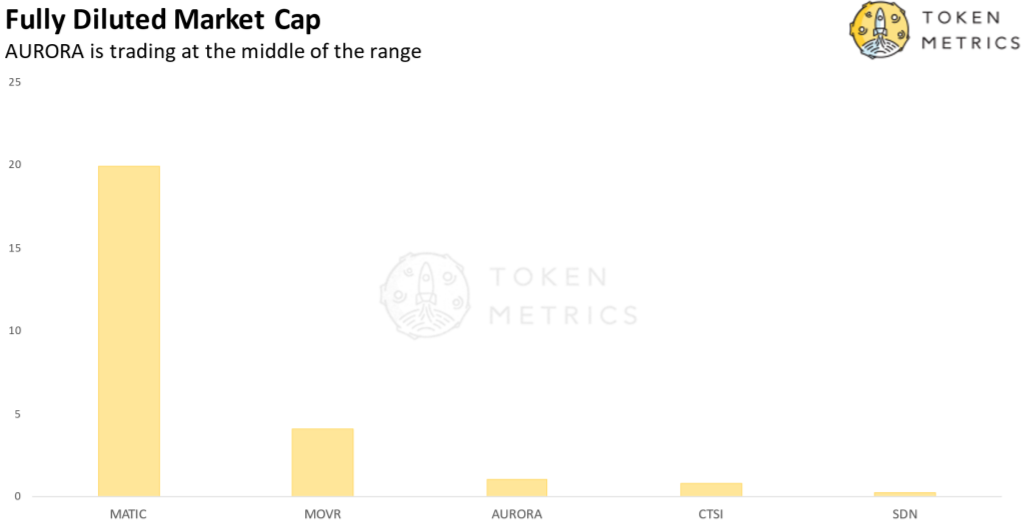 If we tried to gauge the network effect by proxying the Discord community relative to its peers, we see that AURORA is on the cheaper side, and the only protocol which is cheaper is Cartesi. We have used Discord to proxy the network effect because it has a nice balance of developers, users, Discord followers, which are relatively more genuine (unlike Twitter). 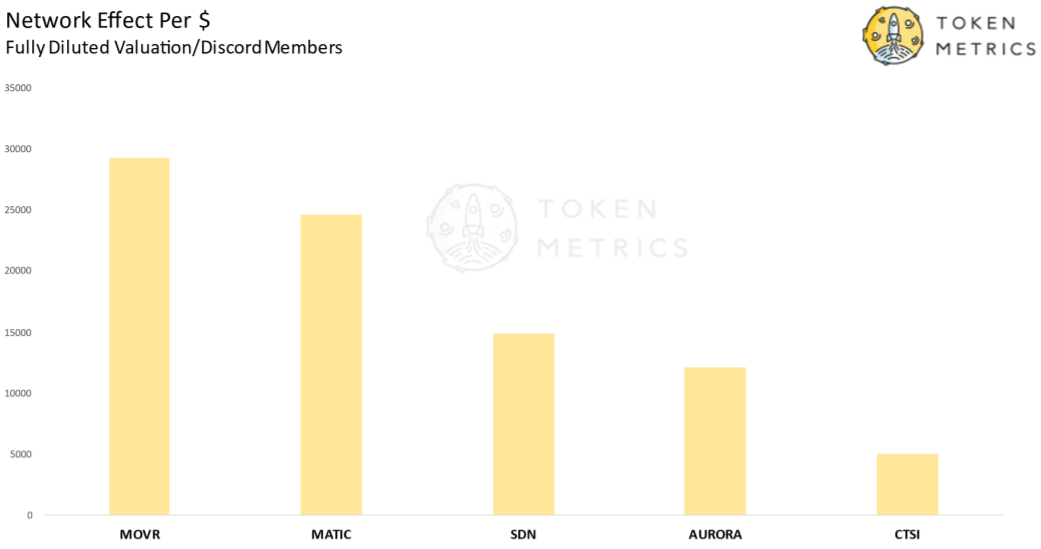 Earlier, we discussed that Near protocol and Aurora have a positive flywheel effect. Another angle is to be playing Aurora's success with a better token utility angle and relative valuation is to proxy it by buying NEAR. NEAR is not just a governance token. It has multiple uses, like staking and paying for network transaction fees. The Near network collects and automatically burns these fees, such that higher usage will lead to more NEAR being burned. It therefore has robust token utility. If you compare its valuation with other layers 1's, it's also among the cheapest: 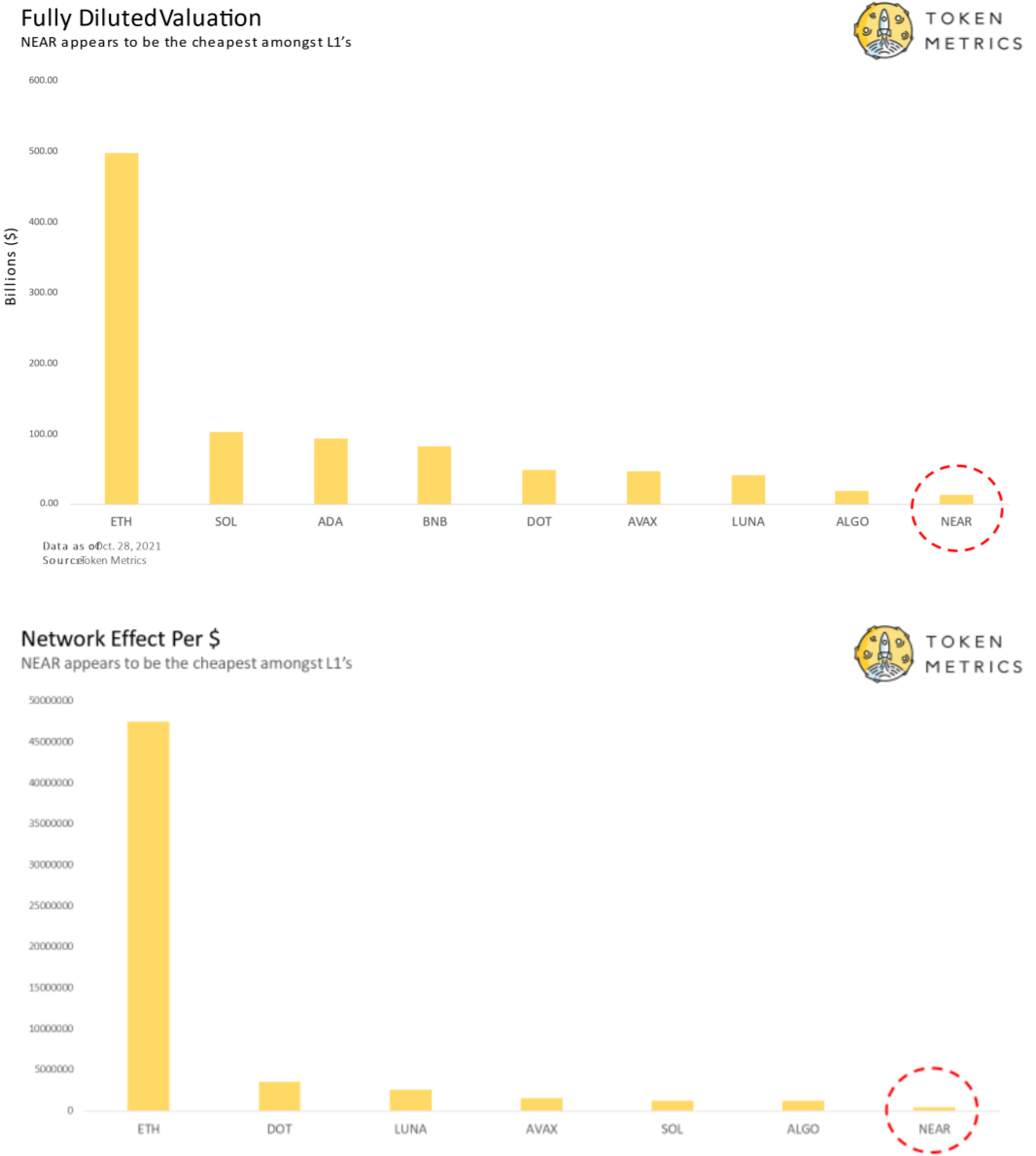 Risk to Our Investment Thesis

● Strong competition. There are many projects trying to do the same, for instance: Moonriver, Moonbeam, Shiden, Astar, Matic and Cartesi

● We have conducted a relative valuation concerning different layers 2 and EVM compatible platforms. Lately, they have seen explosive price appreciation. Based on this valuation methodology, we assume that the market values these projects correctly. There is no assurance that the "cheaper" protocol will generate a positive return if we are in a bubble.

● Bullishness on EVM protocols could go out of fashion as an investment trend for numerous reasons:

o Firstly, teams have to split their resources between EVMs and their own networks.

o EVMs need to be maintained and upgraded in the long run. This could mean the team might lose focuses on network development.

o Overuse of EVMs may cause liquidity fragmentation, and therefore, liquidity can be very difficult to navigate for users.

We believe Aurora is a great project that will see a strong network effect. However, there are concerns regarding its token allocation, token utility, and brewing competition in the space. A safer way to express bullishness on Aurora's success is to proxy it by buying NEAR thanks to their symbiotic relationship. 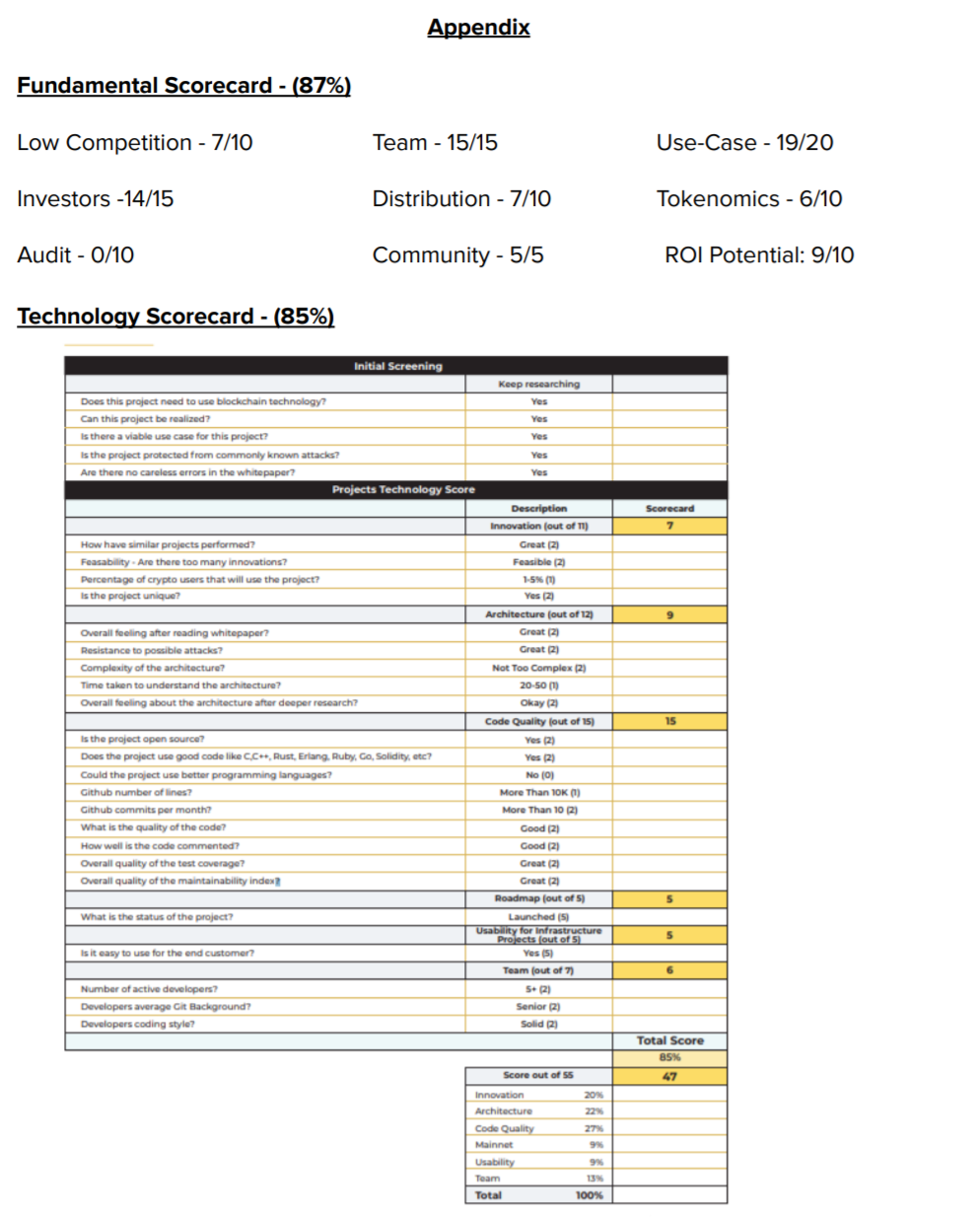