Moonriver had a solid score of 85% in fundamentals and an 80% in technology (see below). Given the recent market volatility, we wanted to revisit its investment thesis (not financial advice) and shed color on its valuation, so our crypto family had a sense of its fair value and what will be the reasonable price to pay for Moonriver.

EVM compatibility makes it easy for Ethereum based blockchain developers to move to, expand to, or transition to Kusama to build their respective applications. Developers can deploy their existing codebase ( they had on Ethereum) without re-engineering it for Kusama.

Aiming to provide a seamless experience for users, Moonriver allows users to easily access applications and wallets via their Ethereum address, making the transition to Moonrivers ecosystem compatible with Ethereum applications like Metamask and Sushiswap.

Ease of transition for both developers and users means that Moonriver has broad, built-in network effects and composability from inception. This, in effect, means Moonriver will grow in tandem with the growth of both the Ethereum and Kusama ecosystems.

Slow transaction speeds, network congestion, and high transaction costs are some of the problems plaguing Ethereum. Although transition towards Ethereum 2.0 promises to solve these issues via a switch to Proof of Stake and sharding, there is still a risk that these rollouts will either be delayed or create more issues. For example, although sharding can theoretically help reduce the latency(slowness) of a network since it is a new and novel implementation, there might be potential issues and challenges that have yet to be worked out.

If this worst-case scenario plays out, developers can write smart contracts in Solidity and launch them on Moonriver. For most projects, building their own parachain on Kusama is a complicated and expensive process, so deploying on Moonriver is an easier way to access Kusama’s ecosystem.

Also, Moonriver, as a layer one blockchain, is operating in a single shard environment, so composability will work the same way it currently does on Ethereum 1.0 while negating low throughput (high transaction fees) of Ethereum 1.0 as Monnriver has already adopted Proof of Stake.

The critical innovation of Kusama, where Moonriver is being built, is that it is a Layer 0 network, connecting various purpose-built (uniquely customized) blockchains. These chains are interoperable with each other, meaning they can communicate with each other. Interoperability is a huge advantage for users and projects as it allows for data transfer, asset transfer, sharing trusted logic, and potentially having deep market liquidity.

Moonriver is just amongst one of the chains on Kusama, and it can interoperate (communicate) with 99 other chains that are building. We believe this would attract existing Ethereum developers to quickly expand to Moonriver as siloed blockchain might limit the potential of their application. In addition, unlike Ethereum, Moonriver also on-chain governance feature. Any on-chain decisions made by the community can be implemented without the need for any forks.

On the supply side of the tokenomics, notably, there is no allocation to the founding team, nor any private sales, VCs, or seed rounds that have been conducted at network genesis. Hence, investors do not have to worry about poor price action due to supply unlocks and consequent token dumps on the market. Community members will own a majority of the MOVR tokens on the network (see figure 1), giving them considerable control over the governance and hence the direction of the network. One of the significant complaints SEC has for crypto is that some projects are incredibly centralized and should be classified as security. Moonriver might be exempt from this complication as it’s reasonably decentralized. 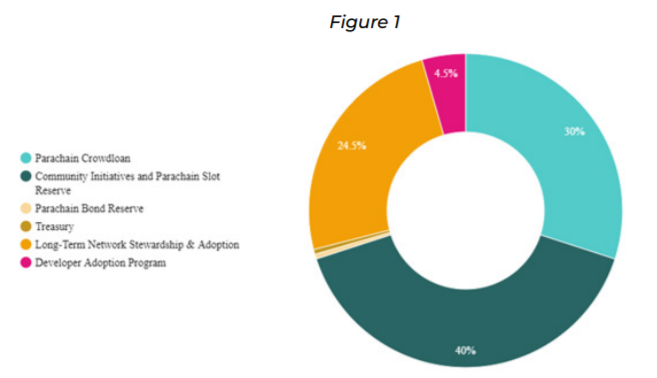 On the demand side of Tokenomics, the MOVR token has multiple uses and is similar to a typical layer 1 token:

Furthermore, fees related to transactions and smart contract execution will be handled in two ways: First, 80% of the spent fees will be burned, acting as a deflationary force on the supply curve. Second, 20% of the spent fees will be transferred to the on-chain treasury, which can be allocated via on-chain governance for initiatives that can increase the network’s adoption and engagement. As the Moonriver is relatively decentralized, one can expect the treasury to benefit the whole community rather than few stakeholders as voting power will not be concentrated in the hands of a few.

It is challenging to value smart contract platforms ( layer 1) because there is no agreed-upon valuation framework. This is because the native token of the L1 platform has attributes of multiple asset classes. As discussed earlier, the Moonriver token (MOVR) has multiple utilities. For Example, it has the characteristic of money as it can act as a store of value and transactional currency within the network. It can also act as an equity claim on fees earned from processing transactions or via token burn (similar to share buyback). And in many ways, a commodity, as one has to pay transaction fees (gas metering) to execute the smart contract.

In this case, investors’ best bet is to value MOVR relative to its peers and similar protocols rather than calculate the intrinsic value with false assumptions. The most straightforward way to conduct this is via quantitative factors (KPIs) such as total value locked, fully diluted market capitalization, market sizing with respect to the market leader, or a mix of these factors. We will be doing just that in the following section.

MOVR Relative Valuation With Other Layer 1

As shown in figure 2, MOVR appears to be the cheapest at a fully diluted valuation of $3.2 bn amongst its peer group. If we assume that it would have valuation catch up with a similar market capitalization as Cardano(ADA) or Solana (SOL), ROI potential is 30X and 21X, respectively (table 2). 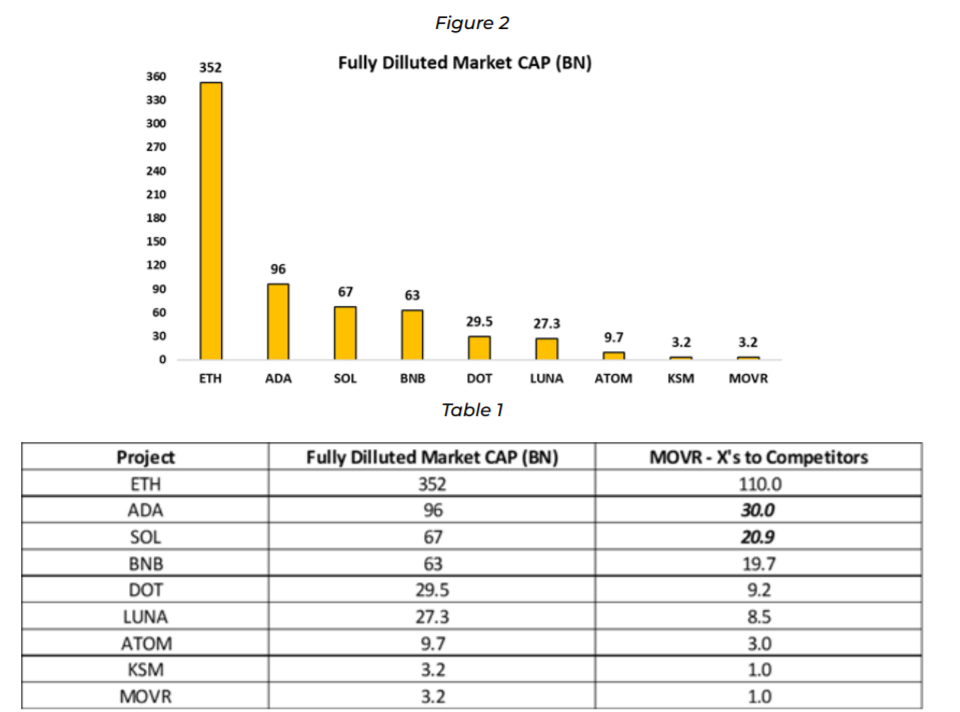 Another interesting point to note is that Kusama (KSM) has a similar valuation as MOVR. Initially, it might appear not easy to digest and easy to conclude that MOVR is expensive as it has a similar valuation to a project it is built upon. But one must be cognizant that MOVR is layer 1 and KSM is layer 0; both have different market dynamics, which are being priced differently by the market.

For instance, one would mainly need KSM for parachain auctions, while MOVR would mainly be needed to pay transaction fees to interact with the DeFi, NFT, and Web3.0 projects built on Moonriver. Additionally, the Total Addressable Market (TAM) of MOVR is well established as it allows new or existing Solidity Dapps to be quickly ramped onto Kusama; one can easily see the TAM as the market capitalization of Ethereum, which is well established. Besides, the valuation expansion of any of these two projects should help see the other trade well too.

One might argue that comparing layer 1 with each other based on its market cap is a bit too simplistic. To refute this, we will be comparing L1s based on the Fully Diluted Market Cap to Total Value Locked (TVL) ratio (figure 3). 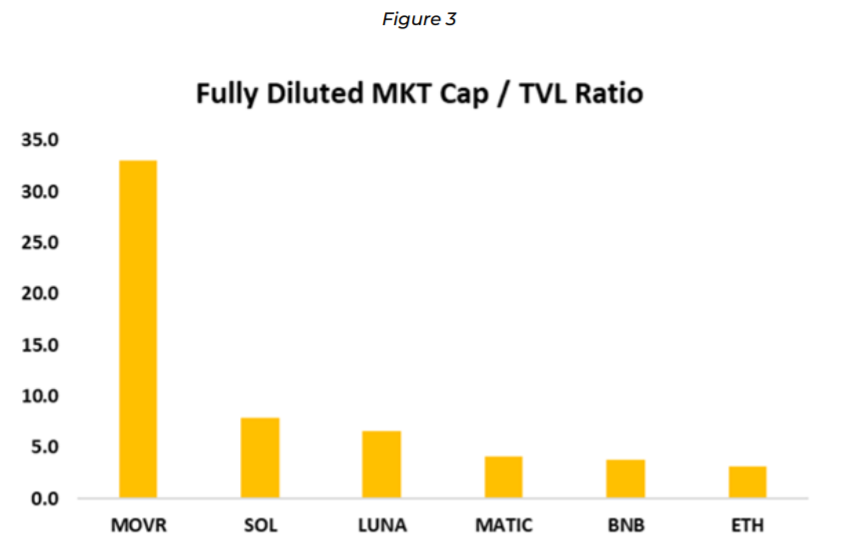 Based on this metric, MOVR seems expensive as its trading at 33X times the TVL locked in its smart contract. In comparison, ETH is trading at 3X. Although MOVR might seem too expensive initially, it can be argued that the market is pricing exponential TVL growth on a forward-looking basis. Currently, the TVL is around 100 million based on DeFi Llama. But upon further research, it seems the market is correct in assuming steep growth as the number of partnerships is growing (figure 4), and the majority of the projects are yet to be deployed.

Moonriver is a complete Ethereum-like environment and works with industrystandard Ethereum tools and DApps, so it makes sense to calculate the target price and ROI potential based on the different scenarios of the market share capture of Ethereum.

At the current price of $331 per MOVR token and Ethereum price at $3000 market expects MOVR to capture a 0.94% market share of Ethereum (table 2). We believe that the market is underestimating how much market share MOVR can capture. 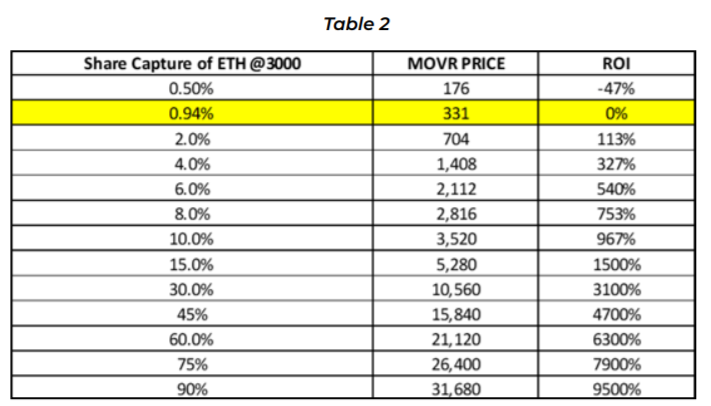 We believe the Moonriver platform extends the base Ethereum feature set with additional on-chain governance and cross-chain integrations. In addition, after evaluating other fundamentals, including community, team, tokenomics, and the value proposition of the technology itself, we feel it can capture between 6% to 10% market share of ETH in our base case. This can lead to 5X to 10X return from the current price of $330 and a target price range of $2112 to $3520 (table 3). 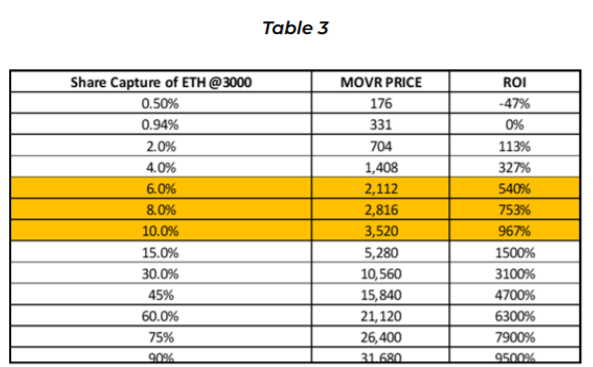 We have also conducted a Blue Sky scenario (bull case), where MOVR can capture 75% to 90% of the ETH market (table 6). This could be possible if a multi-chain narrative in the market picks up strongly and developers also strongly desire interoperability and cross-chain integration. In this scenario, ROI can range between 79X to 95X (table 5). 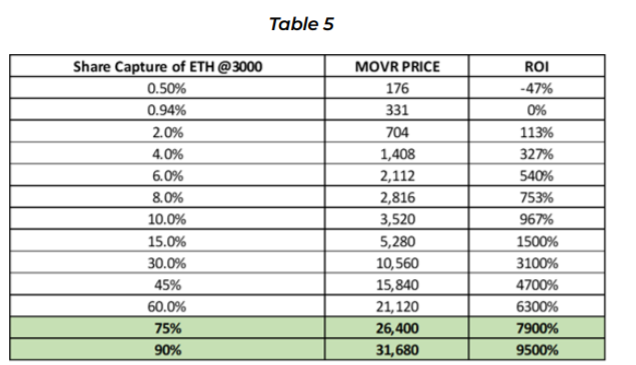 Risk to Thesis and Valuation

• Dual deployment model. Moonriver (on Kusama) and Moonbeam (on Polkdot) fulfill the same function, and Moonriver could trade at a discount relative to Moonbeam. Its initial purpose is to serve as a CanaryNet (sound the alarm for any potential issues before deploying the code to Polkadot).

• In terms of competition, there are more chains on Polkadot offering EVM compatibility; two popular projects include - Acala and Astar.

• We have conducted a relative valuation concerning different layer 1. Lately, layer 1 has seen explosive price appreciation. Based on this valuation methodology, we assume that the market values these projects correctly. There is no assurance that the “cheaper” protocol will generate a positive return if we are in a bubble.

MOVR ticks most of the boxes in our investment checklist, and it has a solid fundamental score of 85% and a substantial score of 80% in technology. In terms of the investment thesis, multiple angles and narratives can be played by investing in MOVR, including a bet on a multi-chain future, a hedge against Ethereum, and simultaneously leveraging Ethereum’s network effect. Tokenomics of this project is robust, and valuation is also fair with 5X to 10X potential. We believe that at the current price level, risk-reward remains favorable for this project.