Living on the Polkadot blockchain, the Moonbeam network is a smart contract platform that provides developers with the ability to build DeFI and Web3 applications that are both cross-chain functional and EVM compatible. With the aim to become the go-to platform for developers, Moonbeam plans to help existing Ethereum-based projects, Polkadot ecosystem projects, and developers of new Dapps by shifting existing workloads and logic to Moonbeam - extending the reach of their applications to new users and assets on other chains.

In 2015, Ethereum changed the blockchain industry indefinitely by launching smart contract capability to its network, since then, thousands of decentralized apps have successfully deployed onto Ethereum - but as the ecosystem grew, it became more congested, creating the need for specialized blockchains. In search of a solution many developers looked for answers on other blockchains, however, they quickly realized the challenges of expanding to new chains. Aiming to fix this problem, Moonbeam was created to be the easiest on-ramp to Polkadot, allowing developers to easily deploy their solidity-based application to Moonbeam and gain access to Polkadots’ growing market. Intended to work as a smart contract platform that allows developers to redeploy their Ethereum dapps in substrate with minimal friction, apps using Moonbeam will not need to be reconfigured or rewritten for the Acala Network (Polkadot’s DeFi Hub). With their radically simple approach to compatibility - Moonbeam allows programmers to keep the same tools, languages, and accounts they already use while also providing them with multi-chain capabilities. With one of their network coins already capturing a Kusama parachain slot, Moonbeam is realizing its mission of becoming the hub of integration and connectivity between networks.

Moonbeam Network was created to be the optimal solution for developers to build and scale their decentralized applications in a multi-chain, Ethereum compatible environment. Providing developers with the necessary platform to maintain scalability and affordability for their users, Moonbeam allows developers to continue building out their existing stack without having to rewrite their code for multi-chain smart contract functionality. Ultimately, Moonbeam aims to lower the barrier to entry for protocols to become multichain interoperable by creating support for solidity-based contracts on Moonbeam and Web3 compatible service providers - allowing them to change the front-end of their Dapps. With the proliferation of different blockchains occurring on a massive scale, the blockchain industry is ripe for a multi-chain smart contract platform that is EVM compatible and interoperable. By shifting workloads and protocols off Ethereum’s layer 1, Moonbeam aims to complement and extend existing projects to help them move workloads from Ethereum to Moonbeam all while expanding their reach into Polkadot.

Use Case: Who benefits from Moonbeam?

Currently, Moonbeam has four main use-cases for project developers including:

• Web3 Compatible API - Allows Ethereum-based tools such as solidity, truffle, ganache, and metamask to be used with Moonriver

• Integrations with other layer 1 blockchains like KUSAMA and ERC-20’s, and infrastructure services like Chainlink and the Graph 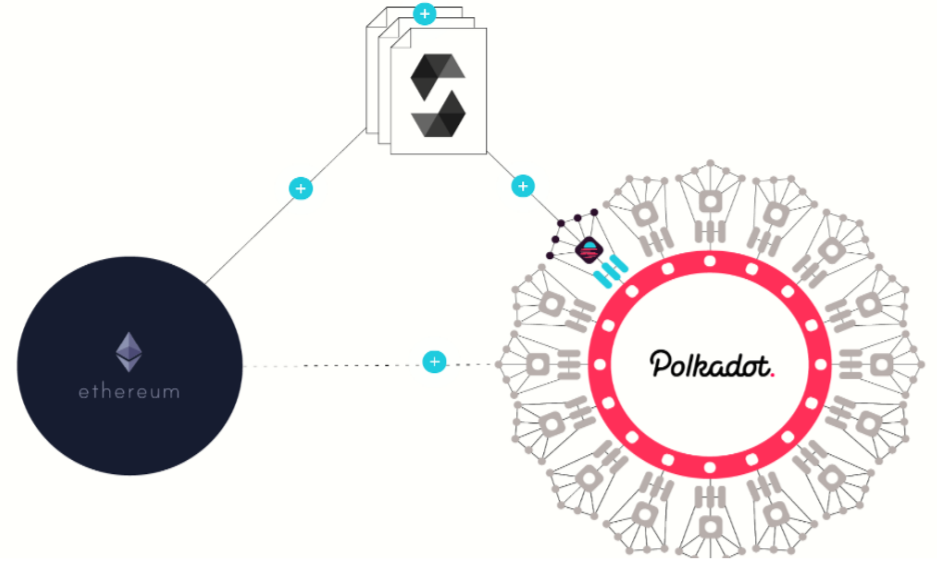 Playing a key role in maintaining and operating the Moonbeam network, the GLMR network token(Moonbeams native token) can be used for executing smart contracts, incentivizing nodes, and paying transactions fees. Governed by a community of token holders, Moonbeam is a decentralized network community that is led by hodlers, core developers, application developers, collators, users, and other contributors.

Technology: How will Moonbeam accomplish its goal?

In order to create a network that is multichain and long-lived, Moonbeam plans to integrate its offerings with Kusama in addition to Polkadot. Before launching their mainnet on Polkadot as an official parachain, Moonbeam set out to accomplish the final deployments to their protocol:

• Moonrock: deployment on the Rococo TestNet (May 2021)

To create a more secure protocol Moonbeam took Polkadot’s approach and created a testnet similar to Kusama called Moonriver, which functions as a “canary network” for future developments to Moonbeam. By doing so any new code that is intended for Moonbeam can be verified under real economic conditions before being implemented. In addition, with its shared security from the Polkadot relay chain, Moonbeam will allow developers to integrate with other chains that are connected to Polkadot.

Living on the Kusama network as a parachain, Moonriver was also created to be an Ethereum compatible ecosystem that aims to help crypto projects expand their reach to new users and markets with a multi-chain approach.

Leveraging Kusama’s security by accessing a parachain slot, the Moonriver platform will offer the same key features as Moonbeam, except for the Kusama network. Features include:

Built as a companion network to Moonbeam, Moonriver provides the network with a permanently incentivized canary network that receives code deployments earlier and launches to Kusama first. Deployed as a parachain to Kusama in June 2021, developers building on Moonriver have priority access to start building, experimenting, and launching cross-chain protocols built on Kusama and Ethereum.

Utilizing both Rust and Substrate programming languages to build out their multi-chain smart contract platform, Moonbeam is leveraging existing Polkadot technologies to provide key blockchain services and functionality, including core blockchain data structures, peer-to-peer networking, consensus mechanisms, and accounts. Expanding their protocol alongside Polkadots’, the team hopes to incorporate any bug fixes, enhancements, and new features into Moonbeam on an ongoing basis.

Striving to implement the same execution behavior and semantics of Ethereum, Moonbeam-based smart contracts are single shard, making cross-contract calls synchronous with execution semantics on Ethereum Layer 1. However, while Moonbeam strives for compatibility with Ethereum, there is a significant difference between the two networks in terms of governance. Building their protocol using Substrake, Moonbeam features more extensive features when it comes to on-chain governance. These blockchain governance modules include functionality to power upgrades to the blockchain through equitable token weighted voting.

Offering any connected application full EVM implementation, Moonbeam has created a proprietary method of connecting user accounts across blockchains by utilizing the power of Substrate. Instead of forcing users to interact with separate addresses across two blockchains to rebalance assets, Moonbeam created their proprietary Unified accounts feature which allows users to use only one address, with a corresponding key, to execute both EVM and substrate functions. Allowing users to access multi-chain features with one address, Moonbeam has standardized single accounts to confirm to Ethereum-Style H160 addresses and ECDSA key standards.

With connectivity to Ethereum being the utmost priority of the protocol, Moonbeam plans to provide the following solutions for projects that want to integrate with Ethereum and Moonbeam.

1. A utility that can export a state from Ethereum into a binary file, where this binary file can be used to import that state into Moonbeam. Each use of this utility would be a one-time, one-way migration.

2. An integrated point-to-point Ethereum bridge directly incorporated into Moonbeam. This bridge would allow for token movement and cross-chain state queries and messages. As the Polkadot ecosystem develops, we expect multiple Ethereum integration options as choices for projects deploying to Moonbeam.

Aiming to provide an easy way for developers to use smart contracts and integrate with other chains, Moonbeam plans on integrating Polkadots’ low-latency cross-chain message passing feature called “XCMP” .5 Utilizing this Substrate development, Moonbeam will be able to facilitate communication between parachains within the Polkadot network and ultimately share trusted logic between chains on the network. Serving a similar function to Linux, Moonbeam is extensively utilizing Substrate to build developer-oriented platforms and libraries that make building applications easier

Adopting a similar token issuance style to Ethereum before the switch to PoS, Moonbeam is currently targeting a 5% inflation rate and an uncapped token supply to promote further adoption and engagement within the network. Of the 5% allocated to inflation, 2.5% will be evenly distributed to stakers of GLMR, 1% will go towards incentivizing collators and 1.5% will go to the parachain bond reserve to accumulate on-chain funds to pay for a parachain slot in perpetuity. In addition, with 80% of transaction fees burned, both GLMR and MOVR will act deflationary force as value accrues on the network. 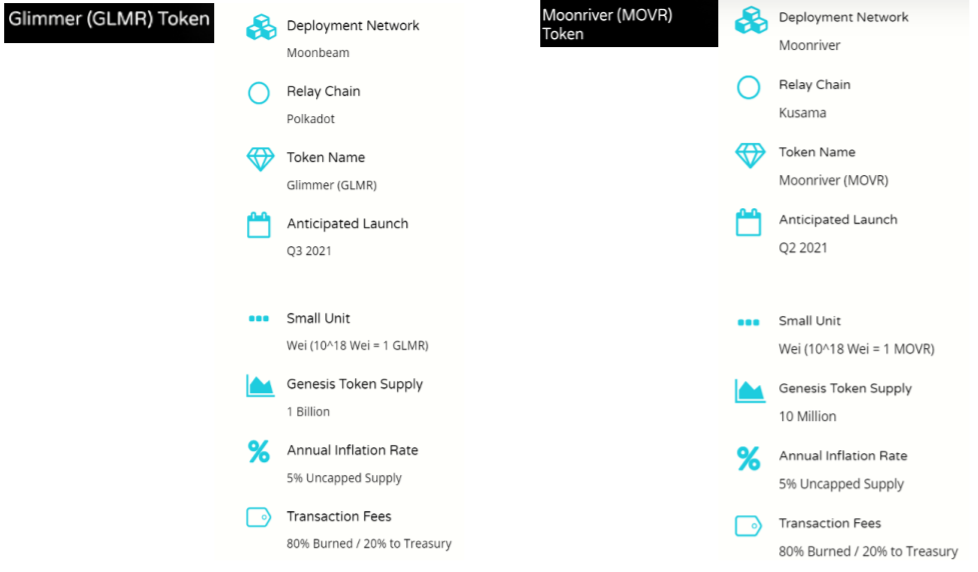 Launching with a total supply of one billion tokens, both Moonriver and Moonbeam will play a vital role in ensuring the network secures and maintains parachain slots on Kusama and Polkadots network. To incentivize the organic growth of their ecosystem, the Moonbeam network and Moonriver network airdropped 8% of the total token supply to Telegram and Discord members and other key ambassadors. Both MOVR and GLMR are subject to the following token distribution and supply schedule.

MOVR, the Kusama version of Moonbeams smart contract protocol, currently has a circulating supply of 1.5 million tokens which were issued to early contributors and network validators. MOVR also has 15% liquidity ratio with $62 million dollars transacted in daily volume. 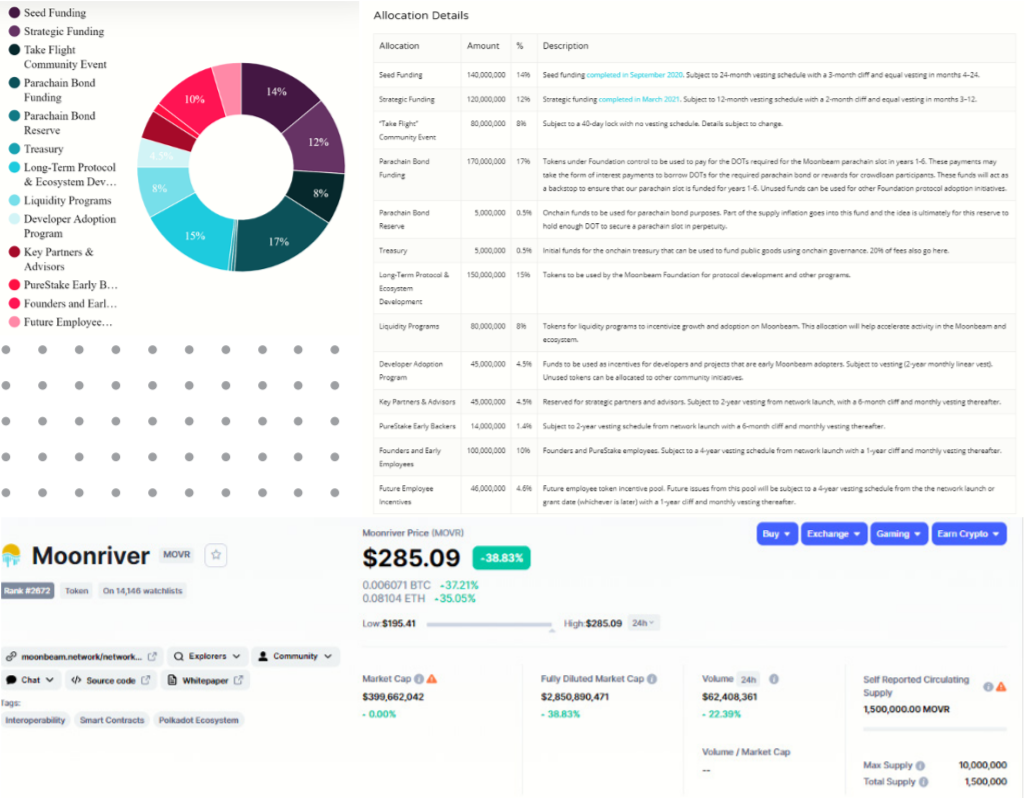 PureStake was founded and launched its API Service in 2019. The PureStake team had spent more than 20 years building software, infrastructure, and cloud companies. Since then, the crypto genie is out of the bottle and the team is taking advantage of the unleashed forces that cannot be stopped or contained. The team believes that using blockchains to move value in an open, low friction, low-cost way will have as large an impact as the internet did back then.6 They are taking advantage of the historical shift where crypto networks and applications will disintermediate many existing companies, structures, and practices, replacing them with code. In April of 2020, PureStake announced Moonbeam, a smart contract platform for the Polkadot network. A couple of months later, PureStake also announced plans to build Moonbeam on Kusama. By the end of 2020, the Purestake team raised a $1.4M Seed round led by Coinfund.7 Just a few short months later in March of 2021, PureStake closed a $6M strategic round of funding for the Moonbeam Network. With investors like Binance Labs and DBV Capital, there is no sign that PureStake is slowing down any time soon.

Derek is a SAAS expert. He has over 20 years of experience building software and cloud companies. Prior to Purestake, Derek co-founded Fuze, where he was the CTO and led the product and engineering teams in creating a global unified Communications-as-a-Service cloud platform with points of presence all around the world, a low latency global network, and a suite of end-user web, desktop, and mobile communications applications. During his time at Fuze, the company grew to 700 employees and a #150M run rate.

VP of Engineering: Tim Baldwin Tim has over 20 years of engineering experience as a leader of application development and DevOps teams. Prior to PureStake, Tim was the Vp of Engineering at Computer Services, Inc., where he built a compliance API-as-a-Service and supported customers like Google, eBay, Stripe, Facebook, Uber.

With the belief in a multichain future with many chains, Moonbeam is on a mission to leverage the power of Polkadot and Substrate to create a smart contract platform that provides an EVM-compatible environment for developers building Dapps. Hoping to bridge existing smart contract platforms on a single chain to two or more chains, Moonbeam allows developers to shift existing workloads and logic to build out their applications on new chains. Developing alongside one of the largest blockchains, Moonbean is designed to promote the long-term interoperable future of DeFi.

After evaluating the project in its entirety, the Token Metrics team scored Eden Network objectively, and the results were the following: