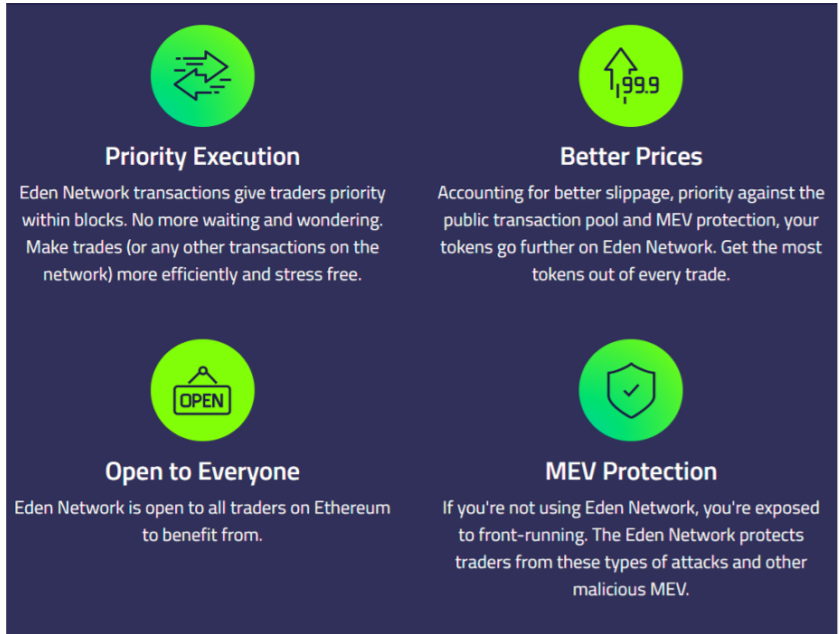 With Ethereum’s network being more congested than ever thanks to the recent NFT craze, many individuals wonder what the recent EIP-1559 proposal did to alleviate the issue - or if it had any effect at all. Contrary to what many think, this recent proposal was not designed to reduce the cost of interacting with the network, but rather the predictability of interacting with it.

However, while the transition from PoW to PoS created a more equitable distribution of the handling of Ethereum’s decentralized economies, it did not eliminate the potential for arbitrage. Inheriting the ability to extract more value from traders, validators in ETH’s 2.0 network are able to reorder transactions on various DEX’s and other DeFi protocols to ensure the transactions with the most profit are verified first. With natural tension existent in Ethereum’s architecture, the recent shift under the EIP-1559 proposal introduced additional uncertainties for participating parties on future block producer rewards. Aiming to provide a protocol that equitably selected economically staked participants on ETH 2.0’s network, Eden Network creates a transparent and fair set of rules to order transactions while simultaneously incentivizing a new token reward system that realizes MEV profits to block producers to maximize network security.

Consisting of a novel transaction ordering mechanism and a private relayer that any individual or bot can leverage to guarantee submitted transactions - Eden Network takes a user-focused approach to solving the MEV problem by creating stronger incentives for all stakeholders driven by their native EDEN token. Instead of favoring one of the key stakeholders in the MEV system, Eden network incentivizes a network of honest block producers who validate transactions per the ordering mechanism. With several bluechip projects like Sushiswap, Uniswap, and 1INCH acquiring priority slots to guarantee a more equitable distribution of Ethereum’s decentralized network, Eden network is in a unique position to be leveraged industry-wide to prevent malicious front runners and bots who look to extract value by making user’s pay more. 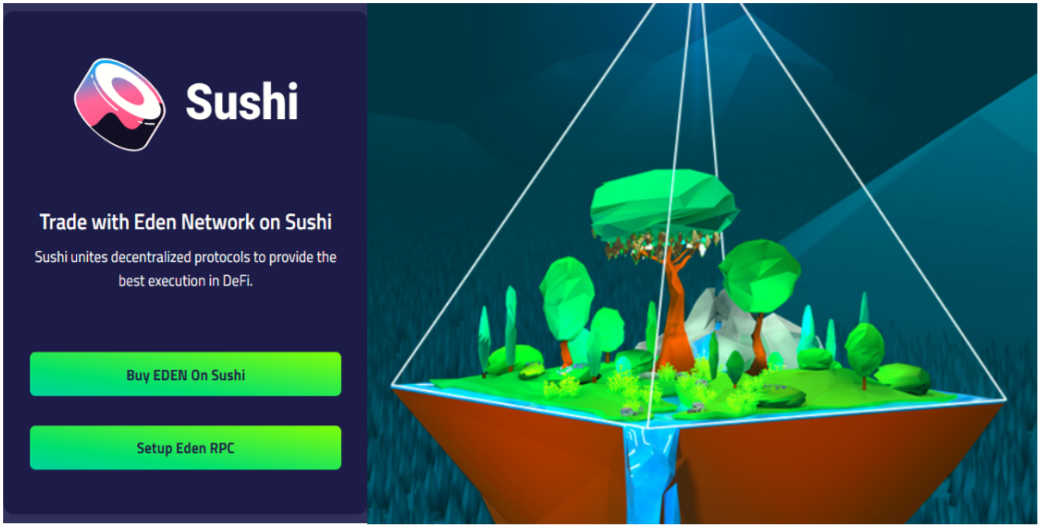 With the hope of having their protocol implemented across major DeFi protocols, Eden Network is set out to achieve the following objectives to secure more equitable distribution across Ethereum’s ecosystem.

2. Access to NFT Drops and IDO allocation: using Eden network’s priority block space, individuals can maximize their chances of getting an exclusive NFT drop or coin allocation via IDO.

3. Ease of use across DeFi Applications: Integrated with apps like Curve and Bancor, Eden network also provides MEV protection and block space priority in applications to limit a user’s downside when interacting with DeFI.

To understand the potential of Eden network one must first understand the necessity of the protocol and the downsides of interacting with deFi protocols that lack MEV resistant features similar to Eden network. Thank’s to innovative DeFi protocols like Uniswap and 1inch which brought a revolutionary wave of economic empowerment to cryptocurrencies, individuals are able to utilize their Ethereum to buy digital assets or accumulate the tokens they desire without intermediaries to limit their transactions. However, emerging alongside the expansion of Ethereum’s DeFi capabilities, front-running and other malicious attacks on the network began when user’s discovered these new use-cases for their ETH in projects like Cryptokittiez and Uniswap.

Decentralized in nature, Ethereum’s block confirmation network consists of a mempool which is similar to a node and allows blockchains to store information about unconfirmed transactions. Before being broadcasted to miners, all valid transactions enter a mempool; during times of high network activity, Ethereum’s mempool skyrockets and creates opportunities for arbitrage. These mempool sniping mechanisms are popular ways to extract quick money among tech-savvy traders, and as DeFi continues to expand, many protocols are actively working on implementing methods to equitably execute transactions. Aiming to fill this gap by creating a decentralized protocol that is able to secure oracle middleware to ensure solvency, security, and network sustainability - Eden network hopes to become the industry standard to maximize value accrual to liquidity providers and protocol users.

To create a network of honest participants, Eden network is set out to achieve the following technological objectives in their protocol to advance the developments of the Ethereum network:

3. Tokenize access to MEV, and redistribute value to network stakeholders

4. Creation of an EDEN DAO to ensure block producers continue to submit blocks in accordance with ETH

Built as an anti-MEV network through the utilization of flashbots, the block structure of Eden network’s transaction queue is divided into four layers according to transaction order: Slot tenant, Staked Eden, and Common pool.

Partnered with 2miners and Ezil, who own about 6% of the total power of Ethereum’s network, participants in Eden network’s first three slots will be allocated to top defi protocols like SushiSwap which are integrated within the network, protecting user’s of Sushiswap and other slot tenants.

To create a new class of transactions that get priority above all other transactions, Eden network has implemented the following features for featured slot tenants:

1. At any time, each slot is owned by exactly one tenant, who has the right to set a “delegate address” for that slot

2. Transactions to the delegate address will be included in the slot

3. The delegate address may be an average user or a smart contract address

4. Transactions submitted to the network that fail have the option of not being included in the block, saving the sender gas fees

To maintain value for the protocols native Eden token, the team implemented a continuous auction mechanism known as a Harberger Tax which creates a deflationary burn mechanism that burns staked EDEN that slot tenants(Sushiswap,1inch) put up to acquire a slot. Taxed on a linear basis at a specific tax rate per day based on the initial amount of principal that they staked, collected taxes are burned and slot tenants lose their claim to slots after their entire balance is depleted.

At the end of the block, there are transactions in the public mempool pool, which are sorted by the gas fees paid. Block producers on the network who include transactions according to the protocol design are expected to receive rewards at the rate of 60% issuance in EDEN token monthly, at a steady rate. If a block producer fails to queue transactions in order based on the amount of EDEN staked, the block producer will not receive their share of EDEN rewards - failing to do this multiple times increase the chance of being ousted out of the network completely.

Block producers and slot tenants that participate in the growth of Eden network are eligible to govern the future trajectory of the protocol - according to the team, the aim of the DAO is to “ensure that block producer submit blocks in accordance with Eden network’s implementation of geth, and do not censor, reorganize, or insert transactions in a given block”.

• Redistributing access to transaction ordering, Individuals who stake 100 or more EDEN tokens are able to leverage the protocol for enhanced privacy and attack protection

The total supply of EDEN is set to a maximum of 250 Million tokens with w/a monthly inflation schedule set to the following equation:

Since Eden network includes a tax mechanism for Slot tenants known as a Harberger tax, EDEN is expected to follow a perpetual deflationary cycle as protocols like SushiSwap and Bancor continuously burn EDEN for exclusive block production. To ensure the growth of their network, however, the protocol plans on minting additional tokens equivalent to the amount burnt as part of their net issuance mechanism.

According to their whitepaper, monthly issuance of EDEN is distributed as follows: 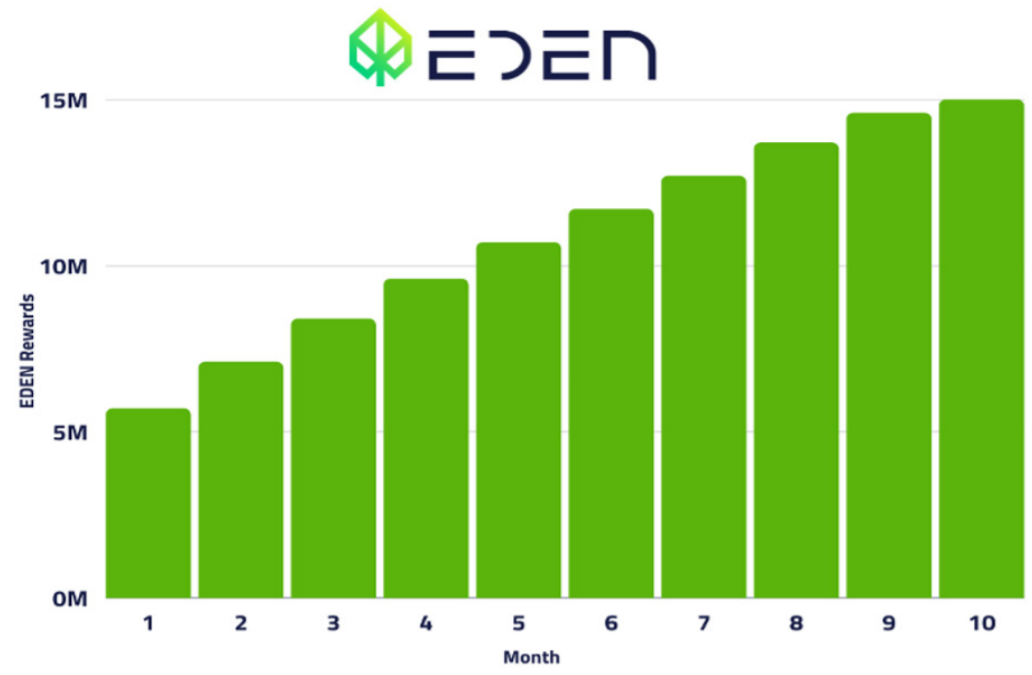 In order to promote the organic growth of the protocol, EdenDAO dispensed 10,000,000 EDEN tokens to their treasury during their first month of launching. From that amount, the 8,100,000 EDEN tokens were distributed via daily emission to validators and liquidity providers.

According to the protocol’s whitepaper, the following amounts were distributed in the first month:

1. 8.1 million to validators and liquidity providers

Currently, EDEN has a total circulating supply of ~13 million tokens, most of which were airdropped early to initial validators and users. EDEN also has a 6% liquidity ratio with 7 million tokens transacted in daily volume.

Eden network is formerly known as “ArcherDao”, on Ethereum block number 12,965,000 on August 5th, 2021 Eden Network made the complete switch and to its new name, and the network launched as fully operational utilizing Eth 2.0.

Built as an MEV resistant protocol that is interactable with major DeFi protocols, Eden network is in a unique position to become the leading protocol to create and maintain an equitable distribution of future block space. By allowing free markets to dictate their ownership of block space by way of a private network relayer, Eden network is able to guarantee users of major protocols like 1inch and Uniswap priority placement and protection from arbitrary reordering. Growing alongside the second biggest blockchain, Eden Network is designed to serve the long-term interest of DeFi applications, users, and block producers that are building on the Ethereum network as a whole.

After evaluating the project in its entirety, the Token Metrics team scored Eden Network objectively, and the results were the following: