Alchemix is a novel DeFi primitive that allows users to get an advance on future yield by issuing a synthetic token. It’s able to do this by deploying the collateral for the loan into yield aggregators such as Yearn Finance that uses the yield generated from the collateral deposit to automatically pay off the debt over time. Initially, stablecoins such as DAI could get an advance on their yield but the team is now expanding their vaults for crypto assets such as ETH and WBTC. The architecture of Alchemix allows for multiple sources of yield to pay back the loan, no risk of liquidation and minimal maintenance of the loan unlike money market protocols which require monitoring the health factor of a loan to avoid liquidation.

Vaults are the smart contracts in the Alchemix protocol that allow users to manage their yield advance positions. Essentially, users deposit DAI into the vault which is then deployed in Yearn Finance’s DAI vault (yvDAI) which earns yield through an automated strategy.

This yield is used to automatically repay the debt from the borrowed alUSD amount and over time the debt will be completely paid off by the yield. The synthetic stablecoin alUSD will eventually be backed by the future yield of many stablecoins such as USDC from multiple yield sources [1]. Yield aggregators provide the solution to finding the best yield across the DeFi ecosystem and rebalancing the vault’s assets to capture the yield.

The best way to illustrate Alchemix is through an example. Suppose a user has 1000 DAI and is looking to get an advance on their yield earning position. The user is able to mint 50% of alUSD from their collateral giving them 500 alUSD whilst locking up their 1000 DAI in Alchemix. Over time the 1000 DAI will repay back the borrowed 500 alUSD. At any time a user can swap the alUSD for DAI using the transmuter and this is how the protocol is able to give you an advance on yield earning positions. 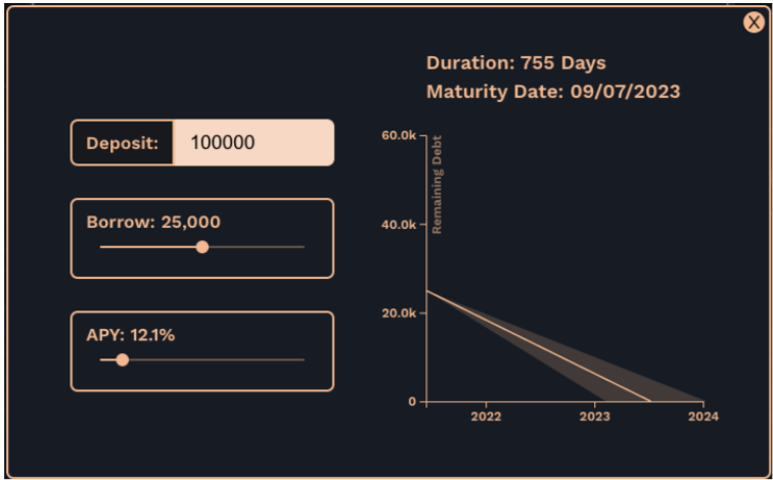 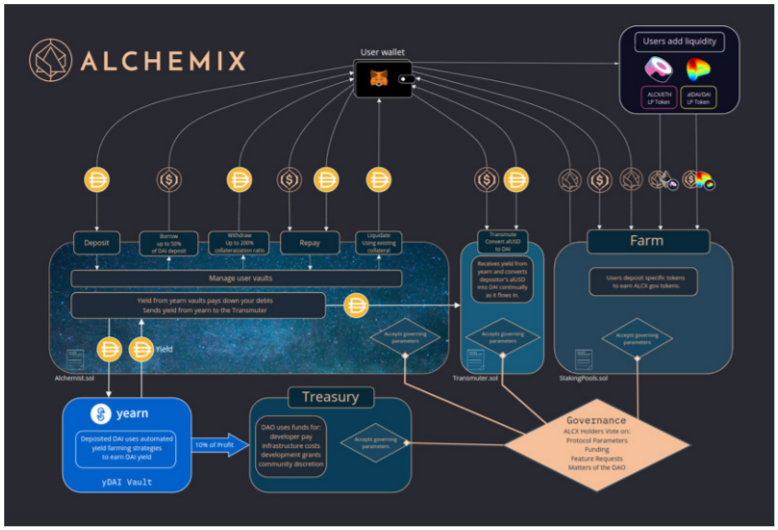 Yield advances on ETH via alETH

Alchemix recently launched tokenized future yields on ETH in the form of the synthetic token alETH. Users are now able to deposit ETH as collateral in an Alchemix vault which is then deployed in Yearn finance’s ETH vault to earn yield and pay back the debt of the alETH.

These parameters were chosen by the team for a conservative launch to ensure the smart contracts perform as expected. Once the proper functionality is confirmed with the guarded launch then the collateralization ratio will be lowered and the debt ceiling will be increased. This is an important set in the tokenization of future yield DeFi primitive as it allows users to get an advance on crypto assets such as ETH meaning users can deploy future yields in whatever way they wish.

The primary aim of Alchemix is to offer a range of synthetic assets that represent tokenized future yield for multiple crypto assets. In the case of stablecoin, Alchemix wants to offer additional collateral types beyond DAI such as USDC making alUSD backed by multiple stablecoin yield streams.

The cryptocurrency asset class is inheritable volatile as speculators look to capture asymmetric upside in an emerging market that looks to be the next technological foundation for the future of finance. However, especially in the DeFi ecosystem with money market protocols this volatile is not beneficial to those who borrow assets and run the risk of liquidation. On may 19th 2021 around $662mm in loans were liquidated in the space of 24 hours.

The Alchemix protocol during the highly volatile market period did not liquidate one user and performed as expected. Additionally, the stability mechanism was tested for alchemix synthetic tokens as users began to convert alUSD to DAI as DAI was trading above it’s peg.

Alchemix raised a $4.9mm round led by CMS, Alameda Research and Immutable Capital and also raised a seed round led by DeFi native funds such as eGirl Capital.

The team sold the ALCX token to investors at $700 per token and the fund provided will be used to fund the further development of the protocol through engineering and auditing.

Alchemix is a new DeFi primitive focusing on offering tokenized future yield to a range of crypto assets including stablecoins and ETH. It’s able to do this by directing the yield generated from the collateral to pay off the debt of the yield advance. Unlike money market protocols Alchemix loans do not run the risk of liquidations and can serve as a low maintenance way for users to get a loan. Backed by leading funds such as CMS and Alameda research, Alchemix looks to position itself as the single protocol for tokenizing future yields and making such advances low maintenance which greatly favors retail DeFi users.